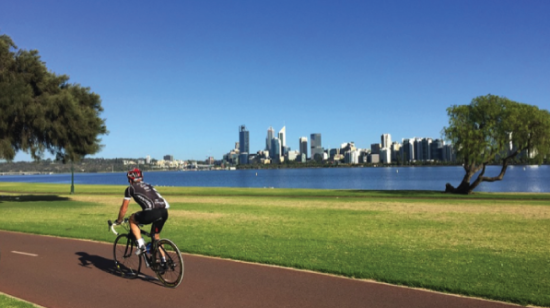 If there is one thing cycling enthusiasts dread most from late autumn throughout the winter months, it would be that they need to put their bikes up until the warm days of spring roll around once again. This year, if you are taking a winter holiday, why not plan on a week or two in the Land Down Under? December marks the start of summer in Australia, so the weather will be ideal for cycling enthusiasts. It’s time to begin making reservations, so here are 4 of the cities cycling enthusiasts say are the best cities to visit on a cycling holiday.

What many people visiting Canberra for the first time on a cycling holiday note about the city is that of all Australian cities, it has the best weather for the sport. Also, there is plenty of nature surrounding the city and so even though you can be riding down a city street, you can also be out in the heart of nature within just about ten minutes. This is one city for where you might want to get a bit of training in beforehand. You may even want to join one of the local cycling teams so they can show you the best routes.

Although a remarkable city for cycling enthusiasts, Perth is not a city for the new or wobbly cyclist. It is most known for being the world’s third windiest city, so it does take some strength and agility to manoeuvre the paths, even though they are flat. With miles and miles of coastline, it’s a lovely smooth ride, but just outside the city it does get a bit hilly. New cycling enthusiasts are told to beware the winds and hills. Even so, it’s a lovely ride!

In recent years, Melbourne has made a concerted attempt to encourage residents and visitors alike to abandon motor cars for bicycles. In this effort, some car lanes have been abolished and the city has replaced them with safer bicycle lanes. It’s interesting to note that it all began as a pledge by a previous Lord Mayor, Robert Doyle, to make the city what he called a “true cycling city.”

When it comes to bicycle lanes, Adelaide is said to have a copious amount. Any cycling enthusiast would absolutely revel in having the ability to cycle their way through the city without the bother of cars pushing them off the roadways. For a true cycling holiday, this lesser-known of the Australian cities might just make the perfect holiday spot.

So, there you have 4 cities to consider for a ‘winter’ holiday in Australia. While it’s cold and dreary elsewhere in the world, Australia is just beginning their summer season with temperatures warm and the days long and lovely. Why not get away from the cold, take a break from work and keep that body in shape for next summer’s cycling tours? In other words, the Land Down Under is the perfect place for a winter holiday for cyclists. See for yourself this year.