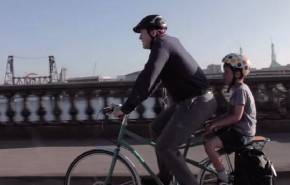 “To build a bike big enough to safely carry grandchildren and groceries, yet small enough to be a fast, fun everyday bike.” – Alistair Williamson

Kinn Bikes has created a bike that’s really like no other on the market, and it was developed directly out of need.

Alistair Williamson is an innovator by nature. He holds several patents and was a high tech engineer for user interface software at Tektronix, where he pioneered new products. But on a personal level, Alistair was just looking for a bike that could haul his grandchildren, so Kinn Bikes was born.

THE BACK SEAT OF A CAR

Alistair says he wanted to create a bike that would function essentially like the back seat of most cars in his life. “Often I drive by myself, but I don’t want to not be able to have a passenger in there or put something back there, or even lend it to a friend and make adjustments so it fits them.” Outside Magazine dubbed his bike the “minivan of bikes.”

Kinn created what they call a “mid-tail design” meaning the bike isn’t long like an Xtracycle, but does have an extended wheel base for increased stability and strength.

The Cascade Flyer is their pioneer bike, which Alistair dubs a “City Commuting Bike Plus” and describes it as “a great city bike that can do a little more”.

The bike comes in two versions, with a 27 speed derailleur or an Alfine 8-Speed Internal hub. Both versions have mechanical disc brakes front and rear. But more than that, the Cascade Flyer has features we’ve never before seen on a bike.

The most innovative aspect of the Cascade Flyer is ability to “twist” the front wheel for a more compact design. “You can spin the front wheel around 180o to point backwards. That shortens the bike by four inches and means it can fit easily in smaller spaces,” like in the back of a car or on a bus rack. A hidden spring-loaded latch gently holds the wheel in place making it easy to carry. “Once you’re ready to ride away again, simply twist the handlebars back around and off you go.”

The Swivel Deck, bamboo platform on the rear rack, also caught our eye. “Turn the Twist-lock dial and rotate the rack for a wide, stable platform. Or, remove it entirely to reveal the Easyfit window, compatible with Yepp’s internationally acclaimed child seats. You can just snap in the child seat, or take it off in under 90 seconds. Plus it anchors directly to the frame rather than a bolt or adapter, ensuring a lot of security and a little peace of mind.”

“If you have to take the child seat on or off, if your cargo is too big to carry, if you have to think about which bike to use that day… removing all of those barriers was part of the design premise.” Alistair says it has been “really fun coming up with these features.”

Alistair was dedicated to bringing his vision to reality right here in Portland, and the support of local creators helped make it happen. Zen Fabrication makes his frames, his wheels are supplied by Sugar Wheelworks. The dropouts and foot peg brackets are cut in Aloha, the powder coating happens in east Portland and a slew of other local business have helped Alistair realize his dream.

Alistair’s not the only one dedicated to creating in Portland. He’s part of the Portland Made collective that aims to revitalize manufacturing in Stumptown.

Kickstarter campaigns seem to be everywhere these days, and Kinn has a campaign currently running. But for Alistair, it’s not simply about raising money to launch his bike company. “We want to bring the people who ride these bikes into the circle, be a part of the kickstarter and you’re inside the circle. Together we are building bikes that will be a bigger part of your life – that are beautiful and that are built here.”

Kinn Bikes initially built 30 bikes and they sold. There is demand from all over the world, and they have a goal of building 100 bikes. The Kickstarter campaign will allow Kinn to increase their production and get the company off the ground.

SEE THE CASCADE FLYER IN PERSON

Twisting handlebars? A swivel deck? These features are best experienced in person. Visit Kinn’s booth at the Handmade Bicycle Show September 28 and 29 in Portland for an up-close view.