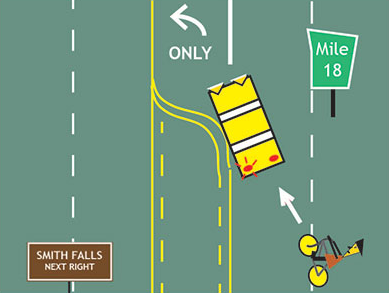 Recently I was peppered with questions relating to bicycling in Oregon, and I hardly new the answers.

It’s in the cards

A friend introduced me to the deck of “Rules of the Road – Oregon” cards which showcase vexing traffic scenarios.” These 50 clever question and answer cards are the work of the nonprofit organization Animated Traffic Law. The project was a partnership between longtime local cyclist advocates, Swanson, Thomas, Coon & Newton Attorneys and Cycle Oregon, so I knew the correct answer on the back of each card would be legally legit.

Each question concerns either bicyclists or pedestrians and their rights and duties as road users according to Oregon law. I thought, I’m a cyclist and a pedestrian, this should be a cinch!

My friend read me a card from the deck: “Does a bicyclist have to dismount before entering a crosswalk?”
I paused. Such a simple, straightforward question, yet I wasn’t 100 percent sure of the answer. “”No?”” I questioned, more than answered.
The answer, it turns out, is: “No.”

My friend picked another: “Three bicyclists are traveling together. They are alongside one another within a single lane. As long as they do not impede traffic is this legal?”
I paused, then declared, “Yes, take the lane, like a car!”
I was wrong. The answer is: “No. It is illegal for more than two bicyclists to travel alongside one another on a roadway.”

My friend queried: “As you approach an intersection you notice painted in your lane a line of upside down triangles. What do these mean?”
What? no clue. “Oy. The rest of the arrow has worn off?” I knew my response was a long shot.
The answer: “This line of upside down triangles is known as a ‘yield line.’ At the point of the triangles, you are to slow your vehicle (bike or car) and yield if necessary.”
This and several other questions from the deck that expanded my bike vocabulary. I learned fog line, the legal definition of a bike lane, sharrow and more.

These scenarios provided me with a wake-up call for road riding, particularly if I have a trailer in tow and may be gliding through a crosswalk or traveling slower than the speed of traffic. Thanks to all parties involved in creating these cards; I’m a better cyclist for having played this game.

You can view the full card series here.

Angie Marsh is a lifelong Portland cyclist. Her random thoughts can be found on Twitter at @angieSuMarsh