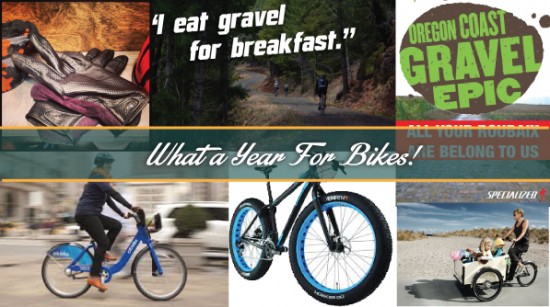 Last year was a pretty interesting one for those of us who like bikes: bike commuting is on the rise, bike share programs around the country are getting new folks into cycling, and infrastructure improvements are making cycling safer.

A wealth of notable events happened this year. Here’s our recap of some of the biggest bike news stories of 2013. What did we leave out? Leave your top stories in the comments below.

Back in May, New York’s Citibike bike share program got started to great consternation and gnashing of teeth. Turns out it didn’t trigger the apocalypse many opponents worried it would, causing the New York Times to look back, shocked, in a piece with the much-lampooned title “No Riders Killed in First 5 Months of New York City Bike-Share Program“.

Bay Area Bike Share and Chicago’s Divvy both also rolled out in 2013 – with less fuss and just as much success. Overall, the total bike share fleet in the US more than doubled in 2013, and more than 30 cities now have programs.

Meanwhile in the Pacific Northwest we’ve been getting some bike share rumblings of our own. Puget Sound Bike Share in Seattle is slowly pushing forward towards its launch next spring, and in Portland, Alta Bike Share and the City of Portland have come up with agreements to create a publicly funded bike share program in 2014.

Eugene is also looking at the feasibility of its own bike share system, which would link up with the smaller student-funded bike share system that the University of Oregon plans to launch this spring.

The environmental new source Grist notes that over the next year the nation’s bike share fleet will more than double again, both because of growth in existing programs, as well as through the addition of programs in more than 20 cities.

INFRASTRUCTURE ON THE RISE

As more people get on bikes – whether rented or owned – new improvements to infrastructure are being prioritized to accommodate them which, obviously, leads to more people on bikes. Win!

Separated bike paths, or protected bike lanes, are on the rise in North America, and Portland is no exception. The city also bought a new street sweeper sized specifically for the bike lanes, solving the problem of how to keep them free of debris.

Last year also saw a spate of new cycling routes opening in Oregon, like the Historic Columbia River Highway State Trail that connects Portland to the Cascade Locks (h/t), and the Springwater Corridor Trail from Rugg Road to Boring.

It looks like the 27.5 (or 650b) mountain bike wheel is here to stay. Touted as being just as maneuverable as 26-inch wheels while still flowing easily over objects like the 29-inch wheels do, this in-between size is said to be the best of both worlds.

Last December, people in the industry were debating whether or not the 27.5-inch wheel would catch on. This December, bike companies that missed the boat last year are scrambling to get a 27.5 bike into production.

Norco, Intense, Rocky Mountain, Scott, Turner, Trek, and Giant all have 27.5 bikes on the market, but demand has been so high – and supply so low – that bike shops have had trouble keeping them in stock. Next year, all but two of Giant’s mountain bikes will be available with 27.5 wheels.

In style news, we got all sorts of excited after attending Interbike and seeing Giro’s new line of stylish, functional apparel. Bonus points to Giro for including women as much as men in the style options. Giro recognizes that women love to ride bikes, unlike Levis who disappointed us with the huge fanfare surrounding the launch of their men-only cycling apparel line.

In other bike news, e-bike sales have been soaring in Europe for years, but lately the US is starting to catch on, too. BikePortland.org has a nice distillation of facts from a recent study on the subject.

Get FAT FAT FAT! Fat bikes are here to stay. As is an intensely growing love of gravel riding, as we saw with the Oregon Coast Gravel Epic and the Oregon Outback, which filled up in no time even though it’s not until May 2014. Though we’re not saying fat bikes and gravel go hand in hand, one thing is clear – off-the-beaten-path adventuring by bike is IN!

POWER TO THE PEOPLE

The little guys prevailed thanks to social media and the strong cycling community making their voices heard. At least, that’s our take on how things went down with Cafe Roubaix, the Canadian bike shop almost lost their name in a lawsuit with Specialized. Specialized made a public apology on film (which, as far as we know, is only available on Facebook).

BARBUR BLVD IS A MESS

In Portland, Barbur Blvd. is a dangerous mess that was well covered in the news thanks to the good work of BikePortland.org. Here’s hoping for solid changes in 2014.

Emily Finch is a tough-as-nails mama who ditched her car to cart her family of six children around by bike, but her distinctive Bakfiet cargo bike was stolen in November and has yet to be recovered. We’re surprised it hasn’t be spotted somewhere. Fear not, Emily is committed to riding with her family and ordered a new bike.

Remember this guy? In May of 2013, Dr. Jackson Dempsey was jailed for booby-trapping mountain bike trails near Ashland back in 2012.

We could soon be seeing glowing bike paths glittering on our night rides. Maybe. Hopefully. Please?

Oh, right. And way back in January, some guy named Lance admitted to doping in order to win the Tour de France seven times. He kinda-sorta apologized for it on Oprah.

All of us at ORbike would like to send a huge thank you out to all the stellar media sources who fairly and thoroughly covered bicycle news in 2013, especially our friends at BikePortland.org who do such important work for the cycling community in Portland and way beyond. You don’t have an easy job, but your hard work is very much appreciated.

WHAT ARE WE FORGETTING?

What were your favorite cycling moments and trends of 2013? Sound off below in the comments.