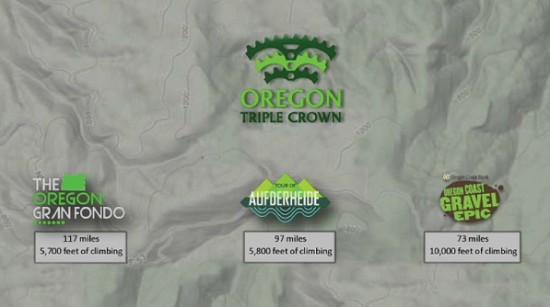 I’d be lying if I said I wasn’t apprehensive about this… I just signed up for the 2014 Oregon Triple Crown, a series of three highly demanding races between June and August that will be a challenge simply to complete. While there is a certain level of fear, the personal reward of completing this challenge is enough to make the attempt worthwhile. In order to complete the Triple Crown, a rider must complete the longest route option at each of the following events:

Starting from the historic town of Cottage Grove, the course heads west into the Coastal Range, giving riders the chance to put 117 miles on their tires and 5,700 feet of merciless climbing on their legs.  There are two other course options: The Medio (71 miles) and Piccolo (31 miles).

The Alpine Course roughly matches the Gran Fondo in climbing at 5,800 feet, but does so in 17 fewer miles. Beginning just outside of Oakridge in Westfir, riders will be both challenged and rewarded – the course boasts some of the most spectacular scenery that the Willamette National Forest has to offer. The Box Canyon (64 miles) and Kiahanie (10-40 mile) Routes are the shorter options.

This is the one that will keep me awake every night leading up to it. Though it’s the shortest event in the series at only 73 miles, the Oregon Coast Gravel Epic more than fills its quota in terms of climbing. With 10,000 feet of elevation gain primarily along gravel roads, this ride outside of Waldport and Yachats will test any rider along its aptly named Abomination Route. There is also a 37 mile Son of Abomination Route

An Elite Group of Six

This is only the second year racers will attempt the Oregon Triple Crown and potentially join an elite group of only six individuals who have completed all three rides. There is something to be said for being one of the first to complete what is sure to become a cornerstone achievement in Oregon cycling, and in my personal racing repertoire.

Preparing for the Challenge

In order to complete this challenge, my bike and I will need to do some serious preparation work. The intensity of mileage means I’ll be checking every part to ensure they’re running smoothly and I’m not giving myself any extra resistance while fighting the hills. These three demanding rides are going to require significant time and energy, but time and energy that I look forward to spending. There, I said it in public. So now I’m committed and sticking with it.

I’m attempting the Triple Crown for a personal challenge, but you don’t have to be competitive to attend and get in an awesome ride. Aid stations with food, sometime entertainment, meals and a beer garden help make these epic rides accessible and significantly more enjoyable. With shorter ride options for the individual events, it is also possible to get in an incredible ride without covering quite so much distance and climbing – making it easier for groups of friends and family to attend. (One can only qualify for the Oregon Triple Crown by completing the most challenge courses for each race.)

I am looking forward to the Oregon Gran Fondo right now: getting prepared, training, working on my bike. I’m anticipating the starting line and hoping to ride away in the end with the Triple Crown finisher’s jersey. If you’re looking for a challenge, or just some extra fun on your bike, the Triple Crown or individual races are sure to be worth the price of admission.

Check out all the details on the Oregon Triple Crown series, and the individual races, on the dark:30 Sports website.