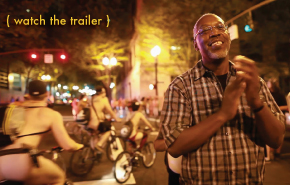 What’s with all the naked people who ride bikes through the streets of Portland every summer? Is it just a crazy band of freaks or something more? Any why are their numbers growing so strongly every year? Why would someone want to do that?

Bare As You Dare is a documentary by Ian McCluskey and NW Documentary that offers a gracious glimpse at the annual Portland World Naked Ride through the experiences of several unlikely-to-get-naked participants. The documentary will premiere at the 11th Annual Filmed by Bike, a film festival of the best bike movies from around the world. The festival takes place April 20-23 at the Clinton Street Theater in Portland.

Read more about the documentary >>.

Ian will be on stage as a part of the festival’s Filmmaker Q+A Sessions following the screening of his movie at the Sunday, April 21st 7pm show. READ MORE >>