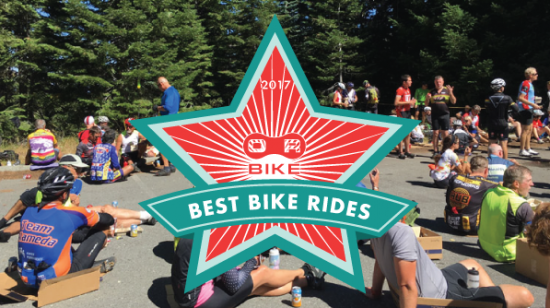 ORbike is the region’s only resource solely dedicated to promoting bike events and helping people find their next bike adventure. Since 2005 we’ve worked with ride organizers all throughout the region to bring more participants to their events.

After a long and rewarding season of getting up at the crack of dawn, following course arrows, exploring new terrain and relaxing with finish line beers, we turn the authority over to our riders – and we let you vote on your favorite supported rides of the season.

575 of you weighed in on 57 regional rides and the results are finally in!

25 years strong! Strawberry Century’s reputation shone through in this year’s contest; they earned a whopping 40% of the votes and came in first place by a landslide.

This ride out of Lebanon, hosted by the Santiam Spokes club, takes riders on a gorgeous ride snaking along the swift Santiam and Calapooia Rivers.

Unlike most events on our list, Swift Summit challenges participants to self support for stretches of 40 miles at a time. With 20% of the vote, the event solidly earned second place statues – very impressive for a first-year event, and clearly a keeper!

A season opener. The first ever Monster Cookie Metric Century was held in 1977, which is why we’re so pleased to see the event high up on the ORbike Best Bike Rides results.

The event begins at the State Capitol Mall in Salem and snakes along back country roads to Champoeg Park and back to Salem. So what’s with the cookie theme? Well, as legend goes, in 1982 some volunteers baked monster-sized cookies for the riders. The treats were such a hit that the name stuck.

Proof that size doesn’t matter! This hidden expedition takes riders through the forested region of the Southern Oregon Coast Range, stationed out of the little-known town of Powers, Oregon. This volunteer-run event pours gushing waterfalls of heart and soul into the beloved ride every year.

With a ridership hovering just around 200, we were astounded to see little Tour de Fronds snag first place (by a landslide) last year. “Well, the secret’s out now!” said one fan of the ride.

It may not be easy to get to the start line, and that’s definitely part of the magical adventure that is Tour de Fronds.

A very special weekend experience, so it’s no wonder you selected it as a top ride. The event takes place on the border of Oregon and California, staged out of the tiny town of Tulelake, CA – just outside of Klamath Falls. The ride, now entering its fourth year, is part of a movement to bring economic vitality and positivity to the region.

Because the ride is in such a remote setting and on a holiday weekend, it makes for an awesome getaway adventure of exploring other parts of our fine state.

Art of Survival Century is a quiet, introspective adventure like no other with birds diving and swooping along the road in front of you, meandering backcountry farm routes, friendly drivers who pass with wide berth and a friendly wave and ranger-led talks and information at each information point along the way.

Art of Survival Century happens every Memorial Day Weekend. The 2018 event is May 26.

The following rides all tied for 6th place with exactly 57 votes.

We would like to send a huge thank you out to all of the region’s hard-working event organizers who put on fantastic rides for us to enjoy. These supported events get more people riding and smiling, and are an incredible way to explore the state of Oregon.

The following rides were on our voting list. We only included supported rides and events that races sanctioned by a race regulation entity. Don’t see your event listed? Be sure to add it to our calendar so we know about it!

Beaverton, Banks and Beyond

Century Ride of the Centuries

Peach of a Century

Ride the Heart of the Valley

Worst Day of the Year Ride