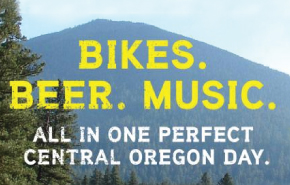 If you’re like many Oregonians, Deschutes Brewery’s Black Butte Porter is in your “Top 5” of all time favorite beers. It’s on my list. And their Mirror Pond Pale Ale is a staple in many an iced down cooler at BBQs all summer long.

The names for Deschutes beers are derived from the spectacular Central Oregon landscape, and their upcoming Black Butte to Mirror Pond Ride on June 22 is a chance to experience and celebrate two notable regions in honor of Deschutes’ 25th anniversary.

Starting at the base of Black Butte, at Black Butte Ranch, the 40 mile point-to-point route will take you on scenic dirt roads winding behind Sisters towards Shevlin Park, before bringing you to a finish line at Bend’s Drake Park on the banks of Mirror Pond. Deschutes promises “damn tasty beer, food and an Anniversary Party like no other” featuring Karl Denson’s Tiny Universe and other live entertainment. Proceeds from the event will benefit Deschutes Land Trust, Deschutes River Conservancy and The Environmental Center, community partners the brewery has worked with for many years.