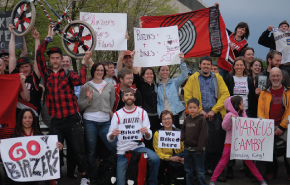 EDITOR’S NOTE: We’re extremely excited for Bike Portland’s Blazers Bike Night – a thrilling marrying of two of Portland’s favorite activities. We planned to tell you all about it, then realized Bike Portland had already done a very good job on their website, so here’s the summary.

Since the first Bike to Blazers we organized back in 2006, our goal has been to showcase cycling for the Trail Blazers organization, the team, and their many fans. We’ve made solid strides toward that goal, but we’re still hoping to make the biking/Blazers connection much stronger.

I’m happy to say that this year, the Blazers reached out to us early wanting to re-energize the Bike Night event and make it bigger and better than ever. As many of you know, I happen to think biking and the Blazers go great together, so I eagerly accepted.

Let it be known that Sunday, November 2nd is Blazers Bike Night at the Moda Center!

The team is taking on the Golden State Warriors, one of the best teams in the Western Conference. But watching the game is just the icing on the cake. We’ll get a huge group of riders together before the game, then ride as a big group over to the Moda Center campus where we’ll have fun and spread the Blazers Bike Night spirit before the game starts.

See the website for a special discount and to get tickets in the Blazers Bike Night block of seats.

Buy your tickets before Monday, October 6 to ensure you’re ticketed for the special Bike Portland block of seats.