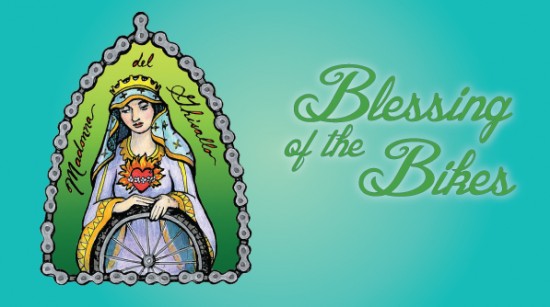 For the past several years, the Catholic Archdiocese of Portland has been holding a Blessing of the Bikes ceremony at the Cathedral of the Immaculate Conception, St. Mary’s church. In 2013 there were no bicycle-related fatalities in Portland. The Archdiocese – the Catholic church’s regional office – is hoping that their upcoming Blessing of the Bikes on June 8th will help protect cyclists for another year.

“The Catholic community and the parish value the contribution that cyclists make to the community and the environment. Cycling in Portland contributes a significant element to our cultural mosaic. The blessing brings together first timers, people of faith and no faith. Some make this an annual event to mark the start of summer,” says Deacon Thomas Gornick, one of the event’s organizers.

Medieval legend says that Count Ghisallo was traveling near the village of Magréglio when he was attacked by highway bandits. Spotting an image of the Virgin Mary in a roadside shrine, he broke away from his attackers and ran to it. There he took refuge, plead for protection and was miraculously saved from the robbers.

As the story spread, the Madonna del Ghisallo became known as patroness of local travelers. In recent times, cyclists often stop to rest and pray at the chapel, which is a local landmark at the top of a steep hill. After World War II, Father Ermelindo Vigano, pastor at the shrine, proposed Ghisallo as the site of an Italian shrine for bicyclists. Madonna del Ghisallo was honored as patroness of cyclists in 1949 by Pope Pius XII. The chapel has become equal part religious shrine and cycling museum with artifacts and photos from the sport. An eternal flame burns there in memory of the cyclists who are no longer with us, and services each Christmas Eve and the Feast of All Souls commemorate them.