It’s widely regarded as the most grueling mt. bike race in the US, and it happens right here in Oregon. The Cascade Cream Puff is August 1 in the area of Oakridge, Oregon.

Adam Haynes, owner of Rolling Cycles in Nampa, Idaho was simply looking for a 100 mile mt. bike event when he first signed up. It was either that or the Leadville 100. He didn’t make the cut for the extremely limited Leadville entry, and for that he is thankful. His experience on the Cascade Cream Puff was incredible and he says he can’t wait to race it again.

Not everyone finishes the Cascade Cream Puff. “I’ve talked to many people in the endurance world: Leadville, High Cascades 100, etc. Cream Puff is the hardest race in the US. EVERYBODY I’ve talked to says it the toughest day of their lives on a bicycle.”

Adam had a lot of experience under his tires when he signed up for the Cream Puff. He’s been a competitive traithlete, completed Olympic distance rides and rides very regularly. But he had never completed an event that was much longer than five hours, and with the 100 mile ultra endurance course of Cascade Cream Puff he knew he was in for a challenge. “Everyone I had talked to raved about the trails in Oakridge so I was eager to give it a shot.”

The landscape of the Willamette National Forest is a stark contrast to Adam’s regular riding region, a high desert singletrack landscape south of Boise. He says there it’s like riding on the moon; the rugged cattle tracks make for a difficult ride. He likes the smoothness and flow of the Cascade Cream Puff. Adam says the trails in Oregon are just too fun to be race trails. At times, even in the midst of such a grueling race, he thought, “How can this be part of a race course? This is so fun!”

Rolling Cycles is a huge part of Adam’s life. “We are a community first, a bike shop second. That is truly our focus,” he says. They are one of only two shops in the second largest city in Idaho and they just opened in 2012. “Our grown has been bonkers,” he explains. “We are blessed by our cycling community and friends who encouraged us to do this.” 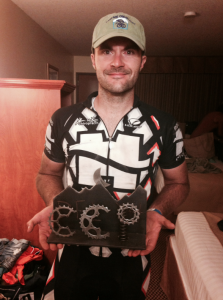 I’ve never needed fuel for anything past five hours. This race was 14 hours and 46 minutes – you need to fuel yourself that entire time, and that’s not easy. It takes planning.

If you don’t have it mentally you’re not going to finish. You’ve got to train your mind to keep yourself going for that long. There are many times when you’re by yourself. The real demons you’re battling start to come out, and it’s even more intense when the dark starts settling in. Train for that as much as the physicality.

I’m an over-preparer but this is not the race to bring extra stuff. I would never race that long with a Camelback, not with the amount of aid they provide out there. A hip pack is what I recommended – something you can stand to carry for that extended distance.

Plan to go a day early or carve out at least a day or two or three afterwards. The town and the community really come out to support it and we as racing stewards need to support it – small communities rely on events like this and that little extra really helps them out.

If you’re considering the Cascade Cream Puff, or a similar ultra endurance race, Adam says, “Everyone has busy schedules, but just do it, I’m a business owner, I organize a high school mt. bike team, we have acreage to maintain, I’m a shop owner and I’m on the local bike advisory committee. I am so thankful I made the time for my experience at Cascade Cream Puff.”

Adam adds that if you’re even looking at a 100 mile mt. bike event, you’ve already made up half your mind. “Get off the couch, get off the computer, put your helmet in the ring and just sign up.”

HOW DID IT GO FOR ADAM?

By the end of the day, Adam was still grinning ear to ear… and he was the very last finisher (pictured here with the “DFL” award for last finisher). Of course he was excited to complete the race, but he says he was surprisingly still excited to be riding the trails.

We think that’s pretty amazing, and so is the Cascade Cream Puff – a special race we’re honored to have here in Oregon.

Last summer, Adam and his friends challenged themselves to sign up for an extreme bike event. Watch the video here >>