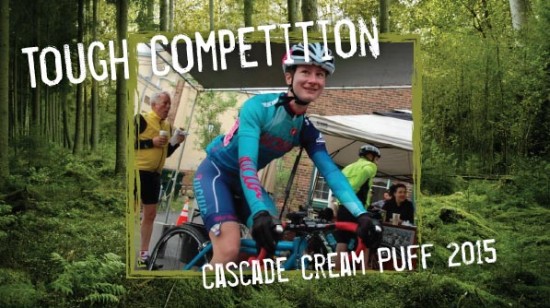 A 100 mile mountain bike race – complete with 18,000 of climbing and 75 miles of singletrack – can come off as a daunting proposition. But Clara Terrell’s ears perked up the moment she heard mention of the venerable Cascade Cream Puff.

“The longer, bigger, less-paved events are definitely the most interesting to me,” says Clara, who has also raced in events like the Oregon Coast Gravel Epic. “I look forward to those.” After staffing the Hutch’s Bicycles support station for the Cascade Cream Puff, Clara was eager to dig in.

“I was really impressed with the atmosphere at the aid stations, and the cyclists doing this event. I thought to myself, this is something I’d like to do some day.” She laughs. “I said that to the wrong people, apparently, and prodded me ‘Why aren’t you doing this next year?'”

And so it was that Clara signed up for her first Cream Puff (as it it affectionately known) in 2013.

Clara has been working in the bike industry for almost 10 years – ever since she first caught the biking bug while living and commuting in Chicago. These days she works for Co-Motion in Eugene,  a prime region for someone who loves to take her bike off road. She rides the Alpine trail in Oakridge (40 miles to the east) nearly every weekend in the summer, the very trail where the Cream Puff crushes souls. She readily admits this gives her an advantage over the contenders who come from outside the region, but as a beloved trail, she’s not the only one who knows it well.

For Clara, the Cream Puff’s extreme length is the main attraction. “The best part is getting to ride your bike all day long,” she says. “You know when you’re having a really great day on the bike and you just don’t want to go back to the car? But there’s all these annoying logistical things, like you’re going to run out of food, or water, or you have things to do at home, and also you’re going to get to the end of the trail. The Cream Puff is a day where there’s nothing else to do, and people are waiting to hand you food, give you water bottles, and they’re going to tell you you’re doing great and push you back out on the trail.” She laughs. “It might cure you of wanting to ride all day. The entire racing aspect aside, it’s a great day.”

Clara may be having a blast while she’s out there, but she’s hardly slacking off. She won the women’s category both years she raced (2013 and 2014), and nearly broke the top 10 overall. “It was really surprising,” says Clara of her first victory. “I was so happy to finish at all. It’s such a long day, and so many things can happen, so merely finishing the Cream Puff is a huge accomplishment.”

Tips from the pro

Because of the need to get everyone off the trail by dark, up to 50% of those who start the race likely won’t finish. Each aid station updates racers how they’re doing, but that thought of hearing someone tell her she was going to miss a cut off inspired Clara to step up her training.

Clara says she did a lot more riding to get better endurance, and also worked on riding more technical trails in order to beef up those skills. “I just really wanted to be able to finish,” Clara explains. “Once you start spending so much time on it, it becomes this huge thing in your mind and the prospect of failing after you’ve dedicated so many hours really puts a lot of pressure on yourself.”

Endurance and handling skills out of the way, Clara’s next biggest challenge was nutrition. “You just have to eat so much, all the time. The way you eat on an eight-hour ride depends on the fact that afterwards you’re going to replenish yourself. But if you eat like that for the first eight hours on a 12-hour ride, you’re going to fall apart,” she says. It’s important to remind yourself to be constantly eating in order to keep up your energy.

Clara raced on a flat bar cross bike, a Specialized Crux with a 1×9 drive train, rim brakes and no suspension – a setup she doesn’t particularly recommend, although it works great for her. When choosing what to ride, she recommends keeping in mind that along with technical singletrack, you’ll also be dealing with 18,000+ feet of climbing. She estimates that 75% of the people who start the race are on a full suspension mountain bikes – a tough choice for climbing. “You spend far too much time on the gravel road climbs to be absolutely miserable,” she says.

It’s worth the struggle

For Clara Terrell, the Cascade Cream Puff gives riders an amazing opportunity to challenge their skills, and experience some of Oregon’s very best singletrack.

“The sense of accomplishment is just phenomenal,” she say. “The trails out there are really fantastic, they do a really good job maintaining and marking everything, and the volunteers are incredibly supportive and uplifting. It’s the kind of challenge that makes you feel like you go beyond your previous limits. And it’s exciting.”

And, she says, that’s what will keep her coming back to the Cascade Cream Puff.

100 (Cream Puff) or 50 (Fritter) miles
Contenders from all over the world
Widely regarded as the nation’s most grueling mt. bike race
Oakridge, Oregon
August 1
MORE INFO >>