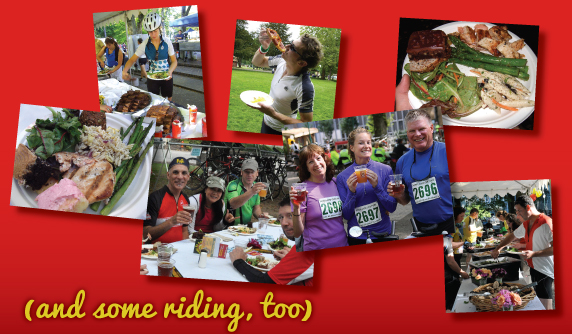 FALL IN LOVE WITH PORTLAND

Fall in love with Portland all over again on Portland Century August 18, a pampered ride through Portland and it’s western fringes. The support is top notch and the new routes are inspiring.

Declare your love for Portland by riding the Portland Century! Gather up a group of friends, family, coworkers and neighbors for a memorable day. You’ll cruise along the best routes as you relax into your saddle and take in the best scents, sounds and sights of the surrounding region.

The Portland Century is the pinnacle of the summer riding season – definitely not to be missed.

The day begins with breakfast and fresh Nossa familia coffee and only gets better from there. Rest stops are positioned about every 15 miles apart and are overflowing with delicious treats, nutritious snacks and lunch. At the finish line, a gourmet feast is served up under the shady tree canopy of the Portland State University Gardens alongside a complimentary beer and wine garden serving Hopworks beer.

GEMS AT THE FRINGES OF WESTERN OREGON

Both Portland Century routes promises to take you on a memorable journey, but for the full experience, sign up for the 100 mile course and get ready for an adventure through the quaint towns on the outskirts of Portland, little known gems just outside our urban core.

Gales Creek is an unincorporated area famous for being the last stagecoach stop on the way to Tillamook. It sleeps in the foothills of the Cascades with a rich landscape.

Gaston is a tiny town of around 650 people and home to several notable wineries, including Elk Cove with its sprawling vineyard and gorgeous grounds.

Midway is an unincorporated rural community that got its name from being the halfway point between Hillsboro and Sherwood. The area is known for its large plant nursery businesses. There is a 1912 one-room schoolhouse, which closed in 1946 and has been preserved as a private residence. It has served as a lodge for the Odd Fellows and Rebekahs civic clubs.

Nestled in Oregon Wine Country, between the Cascade Mountains and the Oregon Coast Range, lies the town of Banks. Surrounded by beauty on all sides, Banks strives to be an environmentally-sensitive city respectful of the nearby farms and forest. With a population of 1,777 it is one of the larger towns you’ll pass through on this segment of your Portland Century journey.

The Portland Century is a luxurious ride, not a race. Settle into your saddle, stop to take pictures, chat with your riding buddies and enjoy a day as you immerse yourself into the landscape. Choose the course that’s right for you and enjoy the day.