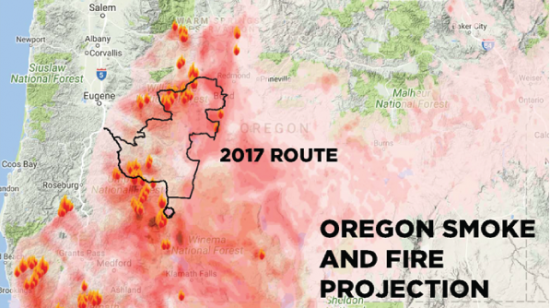 It is with a heavy heart that we report Cycle Oregon 2017 has been canceled due to the wildfires ravaging Oregon right now. After carefully monitoring the worsening situation for the last few weeks, the event has come to this difficult decision.

AFter consulting with state and regional agencies, Cycle Oregon decided to declare their first-ever ride cancellation.

“Fifty percent of individuals fighting fires nationally are in Oregon and Washington.These fires are spread throughout the entire state, with the heaviest fires being in central and southern Oregon – encompassing our 2017 Classic route. Currently, fires are impacting five of our seven days with smoke and air quality levels ranging from unhealthy to hazardous.”
– Executive Director Steve Schultz.

This is a Big Deal

The wildfire situation is a big deal, and Cycle Oregon is a big deal. Cycle Oregon isn’t “just another supported bike ride.”With 2,500 participants moving camp every day in some of the most rural places in our state, Cycle Oregon is a huge undertaking. The event also brings much-nedd support to rural communities through their grant program. With a long history in the state, we have Cycle Oregon to thank for pioneering many innovative projects like the Scenic Bikeways. 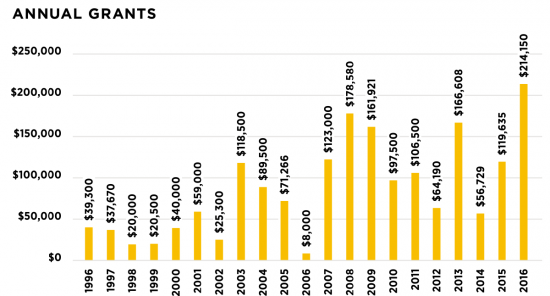 Riders come from all over the world for Cycle Oregon. The event typically sells out well in advance, and many people made their travel plans back in the spring. Hundreds of volunteers and support personnel re-arrange their schedules take time off work, buy extra supplies and otherwise coordinate their personal efforts to be nearly off the grid for a week.

Cycle Oregon is a ride that happens out in some of Oregon’s most rural areas, where significant impact from natural conditions is par for the course.

Care for the riders, the communities through which the event travels and the environment that surrounds the ride have always be of utmost importance to Cycle Oregon. The event has weathered many a storm in its 30 year history. Wildfires have caused mid-ride re-routes in the past. Torrential downpours have flooded campsites. Sometimes both of these burdens have happened at the same time (Cambrdige 2015, anyone?). But never has the ride encountered such destruction as is currently occurring all around the route.

Executive Director Steve Schultz summed it up best in this recently released letter.

Oregon is in crisis.

Forty-four percent of acres burning nationally are in Oregon. Fifty percent of individuals fighting fires nationally are in Oregon and Washington. Eight of the highest trained firefighting teams in the nation are working on the fires in Oregon. These fires are spread throughout the entire state, with the heaviest fires being in central and southern Oregon – encompassing our 2017 Classic route. Currently, fires are impacting five of our seven days with smoke and air quality levels ranging from unhealthy to hazardous. Previously designed alternate routes are now affected with fire and smoke from both new and existing fires. Statewide weather forecasts for the foreseeable future are for more hot, dry and windy weather with an associated increase in fire activity and smoke production.

After discussions with numerous authorities including the Oregon Department of Forestry, the US Forest Service, the Bureau of Land Management, the Oregon Department of Transportation and others and conducting on site personal meetings with Incident Commanders at the fires, we have come to the most difficult decision to cancel the 2017 Classic event.

This is an enormous disappointment for all of us. We as a community rise to challenges, but sometimes the risks far outweigh the potential benefits. We have exhausted the options and possibilities of doing anything but cancelling. The one priority that we won’t jeopardize is safety; we feel we cannot go forward without doing just that.

We are sensitive to the current struggles throughout our communities and our state. Right now, Oregon needs our support; Cycle Oregon will not add to these already challenging times.

This situation is unprecedented in Cycle Oregon history; we are in uncharted territory. As we work on next steps, we ask for time as we determine the best path forward. We realize you have many questions and we are committed to answering them. We will focus our current efforts on taking care of our communities as they deal with their struggles, being as generous as possible to our riders and partners, and supporting our state and those standing up and fighting these perils on our behalf. Cycle Oregon is something that we all embrace, and want to experience, but there are much bigger things at play here.

Over the next number of days, we’ll be working on how we stop this freight train and assess. We will reach back out to you by next Wednesday with our next steps.

Cycle Oregon is more than just a brand or a bike ride. It’s a way of being. We will move forward. We will embrace the environment that surrounds us – good or bad – find meaning in it, and remember that we are here to make a difference. And we will ride on.

At the time of ride cancellation. Click for a larger version. 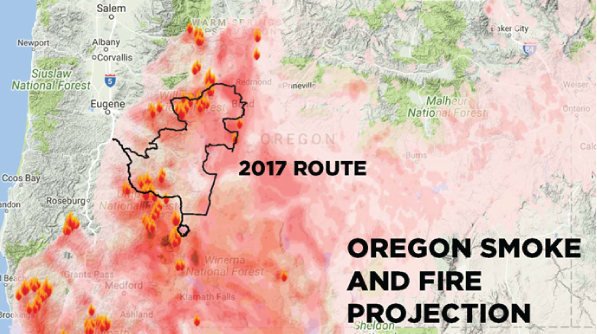