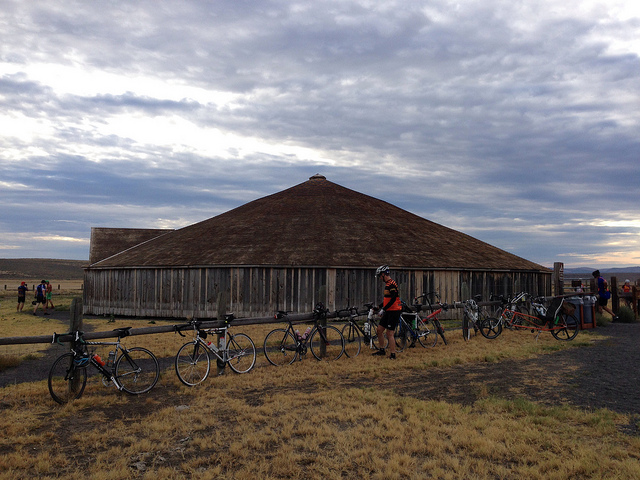 In Diamond, Oregon, the route was cut short because 500 head of cattle were being moved a mile down the road so they could get closer to water. Indeed, it was dry and hot out there on the ranch.

From Diamond, we pedaled our way along a flat, fast and fun route to Crane where a hot springs rest stop awaited us. The wind was at our backs and though some riders weren’t too pleased about the monotony of the flats, I absolutely loved zipping along those flats.

The town of Crane is tiny. The main attraction is a public boarding school where kids from all over the state come to attend. The students helped carry luggage and set up camp. They were friendly and excited to see so many people at their school. Early in the day when the kindergarten class passed by a rider, he took the time to show them his bike computer and talk about his speed and distance. Later in the day the principal flagged him down and said, “I don’t know what you said to those kids, but they’ve been talking about that bike computer all day.”

For dinner we ventured out of camp to the only Cafe in town (which doubles as a market, bar, gift shop and RV park) for a fundraising BBQ, because sometimes its just nice to get out of camp. Our local hosts were friendly, salt of the earth people with a love of their down and an enthusiasm for our visit. It turns out the school library no longer has funding and they’re fighting to keep it going. Proceeds from the BBQ will support the the library. This afforded us an opportunity to tell them about Cycle Oregon’s efforts to support the small communities the ride travels through, and we encouraged them to look into the Cycle Oregon Fund. Everyone was all smiles and high-fives as we left this magical place.

After leaving the dry heat of Diamond then Crane, we climbed up to Seneca where the night was cold and the skies were clear. We saw a gorgeous sunset and the band rocked on through the night. It was the lat night of Cycle Oregon and though riders were utterly exhausted from the long steep ride, they still managed to party enough to knock down an entire section of chairs in the beer garden. Or maybe that was the local kids in the middle of the night.

A hidden trail led us out of Seneca and back to John Day on our final leg of the journey. We traveled along a mostly wooded paved track through the woods along Forest Service road 21, an incredibly serene gem. We climbed a perfectly-graded four-mile incline that left riders huffing and puffing on the right, and passing each other on the left. At the top people patted each other on the backs, took photos, downed water bottles and prepared for the long, fast descent. Later riders faced a headwind along Highway 26 for the final 12 miles back to camp, but those who got out early and rode fast were treated to a nice flat stretch all the way back “home”.

Home was a sweet and sad return to John Day. Riders said their goodbyes and prepared for the (mostly) long drives home. “Until next year” was the resounding refrain as people pulled out of camp. Indeed, until next year. This first timer is definitely going back.