Just a day trip away from Oregon is one of the most outstanding rail-to-trail paths, a rail line converted to a riding path. Many of us regularly head out on training rides, pedal with our group or sign up for supported rides, but when was the last time you spent the day exploring a good old-fashioned rail-to-trail path?

Though these routes are typically thought of as tourists rides, family-friendly biking and perhaps not taken all that seriously in the cycling world, rail-to-trail paths are a special commemoration of our railway history. And here in the northwest, in particular, they are home to some of the most spectacular scenery imaginable.

About the Route of the Hiawatha 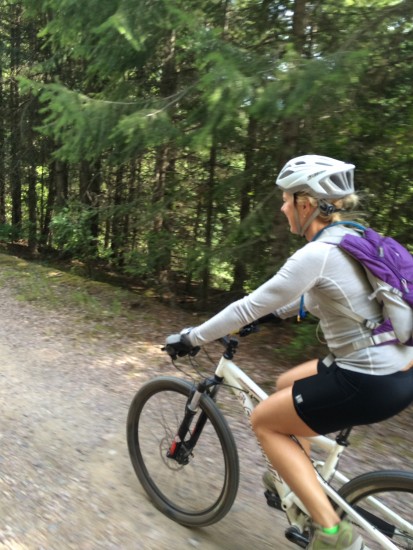 The Route of the Hiawatha is widely regarded as one of the most scenic stretches of railroad in the country. We were originally drawn to this trail after Bethany crashed and injured herself mountain biking on Whistler. With her tender bumps and bruises, we needed an easier biking alternative as we ventured along a Pacific Northwest road trip in our Sprinter van. This trail not only sounded good on paper, it seemed easy enough even for someone in Bethany’s banged-up condition, and (bonus for us!), the trail allows free RV parking at the trailhead.

Traversing 11 tunnels and soaring over nine high trestles in the rugged Bitterroot Mountains between Idaho and Montana, this beautifully restored path is simply not your average rail-to-trail. Originally operating in the late 1800’s from Chicago to Portland, the Hiawatha Trail, often referred to as the “Crown Jewel of rails-to-trails,” is one of the most scenic segments of the Milwaukee Railroad.

Pedaling in a Tunnel of Darkness

Far removed from civilization and nestled in the mountains at the border of Idaho and Montana, this 15-mile trek takes your breath away as it begins with a shudder-inducing 1.66 mile long ride through the pitch black St. Paul Pass, or Taft Tunnel, carved under the Bitterroot Mountains.

As we entered the tunnel, a little light seeped in behind us as our front lights illuminated the trail ahead. The tunnel began to engulf us as we listened to the loud echo of moisture dripping from the walls. But eventually in that tunnel, you lose all light – the opening at the other end was not at all visible as we cautiously pedaled into the darkness. After we moved forward with trepidation, we finally emerged at the other end. The effect was nothing short of spectacular as we squinted into the horizon overlooking our route with endless big sky views.

And that’s just the beginning; there are many tunnels and trestles that will leave you imagining what life was like when the railroad chugged through this rugged landscape over a century ago. The juxtaposition of the cold, damp and absolute blackness of the tunnels and the brilliant 360-degree views offered by the high railway trestles gives meaning to Montana’s reputation as Big Sky Country. It is beyond stunning.

The trail is loaded with the basic amenities you’d expect from a rail-to-trail, such as restroom stops and hard-packed gravel that’s easy to ride on. It maintains approximately a 2% downhill grade throughout the 15 miles – and if you don’t want to head back uphill (making 30 miles round trip), you can take a shuttle back to the main parking area. We visited at the end of August and it wasn’t crowded at all. In fact, in sharing our experience with others, we have learned that few people even know of the trail’s existence. 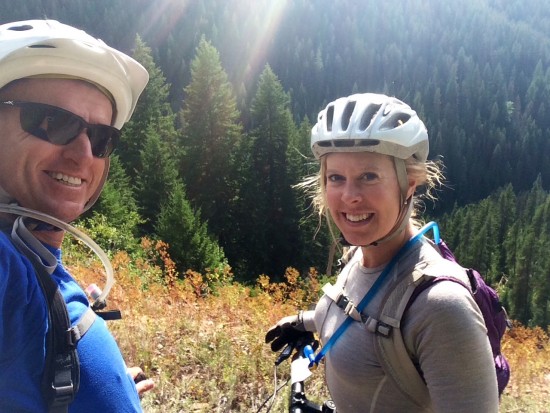 If you go, don’t stop after riding the Route of the Hiawatha trail! Nine of the area’s other top adventure trails start near the Lookout Pass base area. From here, you can hike or mountain bike to high elevation lakes in the Copper Basin or St. Regis, fish for cutthroat trout or climb Stephen’s Peak.

The Route of the Hiawatha opens for the season on May 23, and is just a day trip away from Oregon. Pack the bikes, load up the family and go for the most scenic ride of your life! 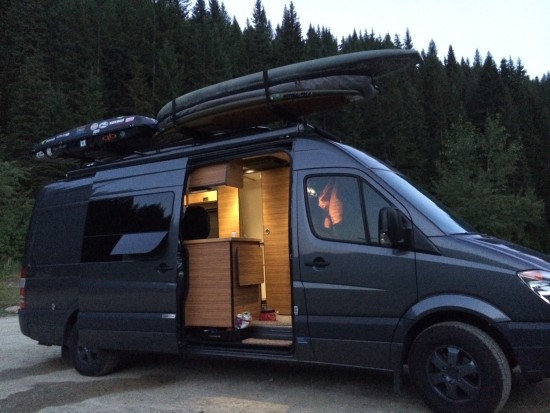 Bethany Smithers and Martin Burzynski are outdoor enthusiasts living and riding their Metrofiets around sunny Sarasota, Florida as they prepare to move to Portland. When they’re not in Sarasota, they can be found in their Mercedes Sprinter conversion van, affectionately known as “VANdal.” Follow along with their adventures on their blog.