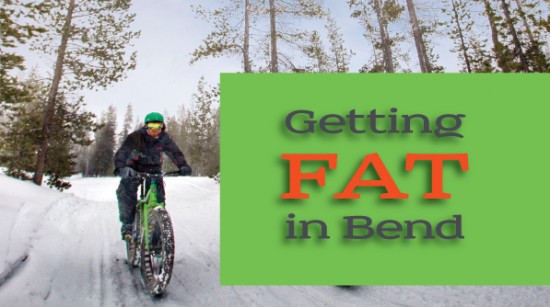 Did our “2014: The Year of the Fatbike” article pique your interest in these hulking velocipedes? Hesitant to drop a couple grand on one? Fatbikes are definitely a divergence from your typical bicycle and, while some are willing to foray into uncharted territory, the majority of us are not. Fortunately, there are opportunities to see for yourself whether a fatbike might be worth the hype. I recently spent an extended weekend in Bend where I was able to take out a couple of Fatback 190s and hit the local trails. Curious?

Rentals and Knowing Where to Go

Crow’s Feet Commons, Hutch’s Bicycles, the Hub Cyclery and Web Cyclery are among the shops offering fatbike rentals, and each has a somewhat varied stable of bikes and sizes to select from. Rentals range from $25 to $40 per day. For that price you’re getting the bike and likely some great insight into local trails and conditions.

If you are looking to get out on the snow – and you should be – head up toward Mount Bachelor and check out the Sno-Parks along Route 372. You’re going to want to stay clear of the Nordic Ski trails to avoid potential user conflict; the snowmobile and snowshoe trails are narrower and provide a better experience anyway. I spent most of my time at the Wanoga trails, which gave me some fun rolling terrain to play around on and I didn’t have any issues riding alongside snowmobilers.

Know When to Go

You’re going to want to look at the forecast for this one. Keep in mind that you’re riding at the Sno-Parks with elevations around 2,000 feet greater than Bend, so temperatures will be around ten degrees cooler. It is best when the area doesn’t get much above freezing, if at all, throughout the day. The warmer it gets, the more likely you are to run into soft trails.

Additionally, you will want to allow time for snow to pack. If there is a large amount of snow overnight, give it time to be groomed and packed down. If the snow isn’t packed you won’t be making it very far. Best conditions exist when it has snowed in the past few days, but when it isn’t currently coming down, or at least not heavily.

I know, words that don’t sound all that appealing, but if you’re planning a weekend of fatbiking, this should be your mantra. Say it every time you take a sip of your beer (you’ll be biking in Bend, beer is a must-do). I had a couple days of warmer and wetter than ideal conditions during my weekend in Bend. Fortunately, nearby singletrack at Horse Ridge and the Radlands made for some fun riding where bikes with narrower tires may have struggled. It’s easy to make up for a lost ride in the snow when you are catching air on one of these massive bikes at the BMX course near Radlands.

The Obvious (or Not-So)

You’re going to be riding in cold and potentially inclement weather. Keeping your clothing closer to that of a skier or snowboarder will work out much better than spandex, provided you can keep your pants away from the chain. Layering and having the ability to remove layers will go a long way, as will a warm pair of boots and gloves. Also, snowboarding goggles a major improvement from conventional cycling eyewear. As always, we suggest wool in those layers.

You won’t be setting any speed records or beating your distance record, so take the time to enjoy the fact that you’re riding a bike in the snow. “Hot chocolate” in a thermos, impromptu snowball fights and the après-fatbike… throw in the great coffee, breweries and restaurants that Bend has to offer and you’ve got a pretty nice weekend ahead of you. Be creative, have fun and get fat! 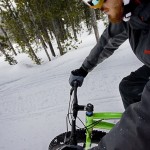 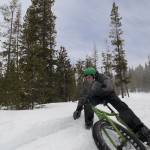 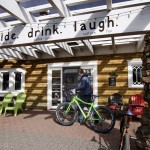 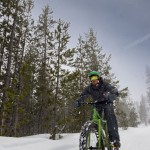 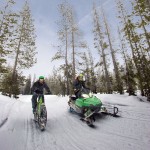 Robert Underhill is a recent graduate of United Bicycle Institute in Portland.