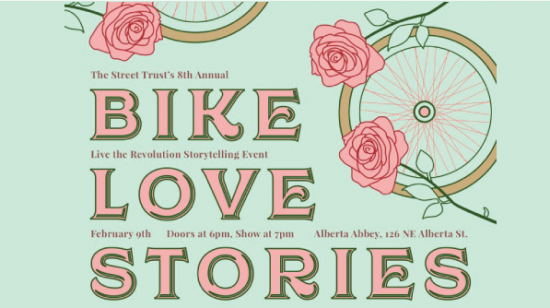 Every year in celebration of their anniversary Sugar Wheel Works hosts a big-ole party, and you’re invited! Head out for a hilarious night of bike stories told live from the stage of the Alberta Abbey Theater in Portland. This event is co-hosted by Jude Gerace of Sugar Wheel Works and Leah Benson of Glady’s Bikes. The night is a fundraiser for The Street Trust, a non-profit organization working hard to make the streets safer for all.

We’ve been sworn to secrecy by the four incredible storytellers, promising on our hearts that we won’t tell you what they’ll be talking about from the stage. But where’s the fun in that? We’re just too excited – so here’s a little taste!

Owner, River City Bicycles and woodworker
“I suck at riding a bike. There is nothing I do well while riding a bike.”
He’s well known for running one of the largest bike shops in the US, but did you know that Dave likes riding his bike to airports… by himself… along freeways?

Co-Founder of Bike Farm and Operations Director for BIKETOWN
“I’m constantly amazed by where my bike has taken me; the many mountains, countries, carreers, relationships.”
Sometimes it takes a tragedy to build commuinty and shed light on isolation. Turns out it’s actually really good to need help.

Local Shero for Black Girls Do Bike PDX
“I’m falling in love with riding a bike.”
How do we make the bike community more equitable, welcoming and accessible? Keyonda has a few ideas to share. Oh no this is not her first rodeo, Keyonda is a veteran of the stage with storytelling stints and open mic nights in her hometown of Chicago.

Founder of Komorebi Cycling Team and Director of Marketing and Sales for Portland Design Works.
She founded an adventurous cycling team and she’s organizing the big WTF Bikexplorers Campout this summer, but what happens when this rugged adventurer finds herself on the grueling road with some strangers… and things don’t go so well?