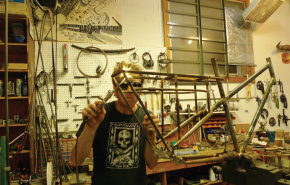 Joseph Ahearne believes in the utility of bikes and the genius of their construction and functioning. He says his bikes are built with “love and fury.”

Once upon a time, Joseph walked around Interbike with his custom-made Spaceman Bicycle Flask Holsters and a sign on his backpack, hoping to inspire a few sales. He eventually moved into full-on bike building. For the past few years Joseph’s focus has been mostly on touring and commuting bikes, bikes with racks, bikes that carry things. Over all these years, he says he still just loves building the bikes. “I’ve gone in a lot of different directions, and keep coming back to the old stuff. The elegance of simplicity, or something like that.”

Joseph says his process is continually evolving. “I’m less interested in the ‘industry’ of bikes, and more into focusing on things that I think are important – the usefulness, the comfort and handling, the aesthetics that tie it all together in a way that you almost don’t even notice. In some form or another, these are the same things I’ve always been working with, but I probably view them differently now because I’m older, have been doing it longer.”

This summer marked Joseph’s 12th year as a frambuilder. Stop by the show to view his latest creations and congratulate him on all the success.