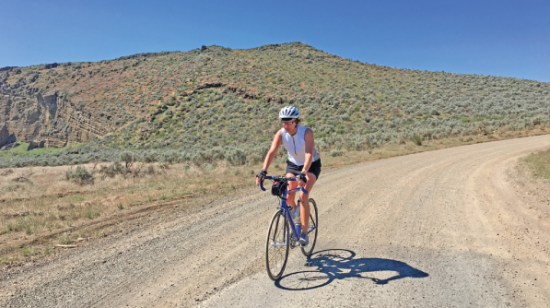 The Art of Survival Century on Memorial Day Weekend is a gorgeous and serene ride secreted away on the border of Oregon and California. In this world, the landscape knows no borders. Wildlife, rolling hills and cyclists weave between the two states.

And this year, on Day Two of the ride you’ll be crunching gravel the entire day.

All Gravel, All Day

We’ve declared 2018 the Year of Gravel. Up until now, the only gravel riding was done by individuals or in competitive settings. 2018 marks the first year that non-competitive organized (paid) gravel rides are happening – and that’s significant. We’re particularly excited that event organizers are finally catching on to the fact that gravel is best enjoyed in a non-competitive setting. After all, one of the best aspects about riding gravel is that you’re away from traffic, deeper into the rural area and more connected to the landscape.
far

Some of the region’s very best gravel routes are in Doris, California, just outside of Klamath Falls. The Art of Survival Century planned three stunning routes for a full day of gravel exploration.

If Gravel Isn’t Your Jam

Not into gravel? No problem! Day one of the ride is still a straight up traditional century ride, with paved routes, several course options and stunningly serene farm road routes.