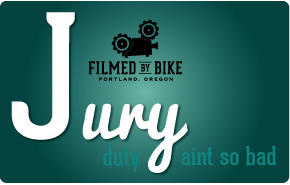 Every once in a while, it’s good to be famous.

Filmed by Bike showcases the best bike movies from around the world and the task of selecting those films is the prestigious honor of the Filmed by Bike jury, a panel of local film and bike enthusiasts and celebrities.

Nominate your bike hero to the jury! Jurors are granted VIP access to the event and an insider peek at the huge collection of international bike movies.