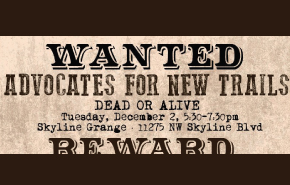 The second community event to talk about a new Metro park area just north of Forest Park (by Scappose/Rocky Point) is being hosted on December 2.

The Scappose Trail area has major access changes in the future planned, so North Tualatin Mountains will become a common name in your riding vocabulary.

Last time only two mountain bikers attended to express their desire for trails. This time Northwest Trail Alliance would like to see 50 in attendance at this critical planning meeting. They’re recommending people bring their helmets so others in the room can see that cyclists are present to have their voices heard.

The two hour meeting will be held at the Skyline Grange Hall, 11275 NW Skyline Blvd. in Portland starting at 5:30pm.

As far back as the 1950s, Portland area leaders saw an unfilled need to provide regionwide planning and coordination to manage growth, infrastructure and development issues that cross jurisdictional boundaries. They also saw a need to protect farms and forests from urbanization and to provide services that are regional in nature. More than 30 years ago, Metro was created to fill that void, becoming the nation’s first directly elected regional government.

Metro works with communities, businesses and residents in the Portland metropolitan area to chart a wise course for the future while protecting the things we love about this place.

Metro serves nearly 1.5 million people in Clackamas, Multnomah, and Washington counties. The agency’s boundary encompasses Portland, Oregon and 24 other cities – from the Columbia River in the north to the bend of the Willamette River near Wilsonville, and from the foothills of the Coast Range near Forest Grove to the banks of the Sandy River at Troutdale.