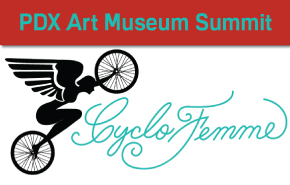 In 1896, the American suffragist Susan B. Anthony observed, “The bicycle has done more for the emancipation of women than anything else in the world.” The legacy of women and cycling in an automobile-dominated culture has remained largely hidden. Today a movement is afoot to invite and encourage even greater numbers of women to hop on bicycles (some designed and built by women) for everything from everyday commuting to cyclecross.

In honor of the Portland Art Museum’s exhibit Cyclepedia: Iconic Bicycle Design, the museum, Women on Wheels, Women on Bikes and CycloFemme join forces to celebrate the past, present, and future of women’s cycling in Portland and beyond. Pop in throughout the day for a series of short interactive talks, film clips, demonstrations, and bike –related performances. Join the CycloFemme movement whether you are a woman interested in learning more about bicycling or an old pro. Special Guest: Sarai Snyder, CycloFemme founder.