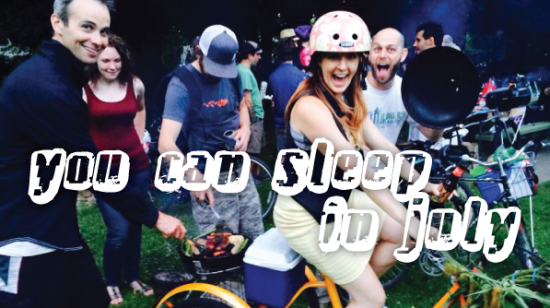 Portland’s well-established three week “bike fun” festival is here and I’m here to help you make the most of this fantastic adventure on two wheels. More than 247 rides are already on the schedule (with more to come) so you have no excuse not to join in.  Nearly all of the rides are completely free and organized by people just like you.

For insight into how to survive, the famous rides, and my top picks, read on!

If you’ve never experienced Pedalpalooza or any sort of “bike fun” group ride, all I can say is go for it!

Pedalpalooza took my biking to the next level. Three of my 10 bikes are specifically set up for bike fun. I sold my car, and just completed the Oregon Outback. I can thank Pedalpalooza for getting me excited about biking again! This is a great way to meet people you otherwise wouldn’t, see the hidden Portland you’ve never known about and simply have a great time on your bike.

The Pedalpalooza Online Calendar is the best place to look for rides, organized by date and time, and submitted by anyone with a desire to lead a group. There is also a print edition sponsored by the Portland Mercury, but ride leaders occasionally change times or locations due to ride conflicts, so it’s best to check online for the most up-to-date information. Rides are classified as Family Friendly, or Adult Only (21+) so you’ll know what kind of crowd it is. The event descriptions hopefully give a good idea about what the ride is about, but the occasional vague description leaves room for inspiration – which can be even more fun!

You might be used to participating in supported events with set routes and entry fees where the organizers are experienced ride leaders. Pedalpalooza gives people with a passion the opportunity to make something creative and engaging happen on two wheels, but these leaders aren’t necessary adept at leading a group of people on an expedition. Bring your own snacks, expect no support and most of all be easy going about the relaxed atmosphere. Settle in, have fun and get to know the other riders around you. You’re in for a wild ride – one you’ll never forget.

The Most Talked About Rides

Somehow along the way, someone started a “this vs. that” ride, and others have resulted over time, making for a hilarious cadre of creative costumed battles on two wheels.

I’ve scoured the calendar and have been looking forward to Pedalpalooza for months now. Here are some of my top highlights.

Have you been to Pedalpalooza or is this your first time? What events are on your calendar?

Eric Iverson is a founder of Grilled by Bike, a group that promotes grilling on two wheels. He is an enthusiastic participant in Portland’s creative bike culture and can often be found sharing hot dogs and quesedillas at parks throughout Portland.