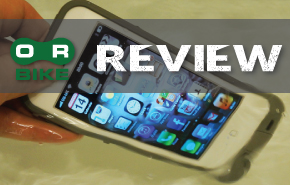 I crashed in a mountain bike race and landed directly on my phone, deeply scratching the Lifeproof Case, but leaving my iPhone unscathed and still very much waterproof. I swam hundreds of feet out into the Columbia River in search of “epic ‘grams” (and I got ’em). I dunked my phone into the Washougal River to capture video of my friends jumping from rocks. I’ve fumbled it. I’ve spilled on it. And I’ve crammed it into sweaty cycling jersey pockets full of tools, tire levers, and Clif Bars. Hundreds of times.

The Lifeproof case works. This little protective box has been a godsend when I’m out on a road bike ride, descending behind a line of teammates and I have to shoot a crucial Vine video at 40mph (which never worked back in my Zip-loc-as-protective-case days).

If having a waterproof and impact-resistant iPhone is your top priority, the Lifeproof is the obvious choice. My phone continued to be able to make calls, shoot photos and scroll endlessly through Facebook and Instagram just fine. And the Lifeproof’s slim profile makes it not-so-obnoxious to put in your pocket compared to other cases.

I’ll admit that the screen takes some of the feeling out of the touch-screen experience (Lifeproof recently released Nuud screenless cases for iPhone 5 and Samsung Galaxy S III that allow you a full-touch experience while impressively remaining 100% waterproof). The screen gives you some seriously glare when you grease it up with face sweat, and the typing becomes pretty hilarious once the screen is dirty. The cloth provided with the Lifeproof does a bang-up job of restoring the case to its original glare-free condition, but I managed to do well enough for several months before I dug the cloth out of a drawer and cleaned it off properly. Bonus: you can use the Lifeproof with gloves sometimes (works best when gloves are soaking in sweat, strangely).

The big drawbacks to the Lifeproof are the the hassles of the headphone adapter and the over-screen. The headphone adapter wasn’t much of an issue for me as I never use my iPhone to listen to music with, nor do I drive and need to plug it into a stereo or hands-free device. But others I talked to hated fiddling with the headphone adapter, or immediately lost either the adapter or the plug or both (which of course renders the Lifeproof useless). The pub is a small bit that screws into the headphone jack spot to keep it plugged up and 100% waterproof when not in use. A very little piece – easily lost.

The takeaway is that if you are constantly sweaty, underwater, checking Instagram while riding a bicycle in the rain (they make a handlebar mount, btw), or dropping your phone in the snow, the Lifeproof case is for you. If you are perpetually dry, plugging in headphones and are frequently texting-while-riding, you might want something else.

This product reviewed by David Boerner, a writer and rider in Portland, Oregon. Check out some of those sweet ‘grams here.