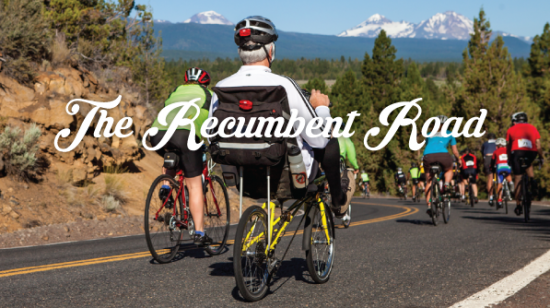 I used to joke that each recumbent should come with a fake beard and belly pillow. To me, recumbents seemed to be the genetic experiments of the bike world: bikes that looked like a wheel chair made violent love with a beach cruiser. These were vehicles that make you fear for the future offsprings of their riders – perhaps a less rugged bicycle version of a ‘Mad Max’ machine.

In short, recumbents were nothing I would ever consider riding.

Then I got involved in a recumbent project. Since I am committed to never sell what I haven’t tried out, I swallowed my prejudice. I borrowed a recumbent from a friend, an avid recumbent connoisseur and collector. He lent me his trusted Greenspeed Magnum and – much to my surprise – I got hooked.

Meet the Barcalounger of Bikes

The Magnum is a barcalounger of a trike and I approached it with no expectations. The first thing I learned is that you can’t wear a bag on your back while riding a recumbent – if you bring something with you, even in your pocket, you need to make sure that you have a rack, pannier or basket attached to the recumbent. Once we got over that hurdle, though, I did enjoy the riding position – just sit down – and the new perspective.

Riding a trike feels like sitting in a moving armchair or pedal go kart. It has something exhilarating to it. My 12-old son described it as “drift” after doing donuts for an hour in an empty school yard.

It Surely is Comfortable

I don’t know if it was my pride or the sizable thighs I call my own, but I conquered the usual city hills only incrementally slower than on my regular bike. Going down a hill on a recumbent is fun! Overall I was a little slower on the trike than on an upright, but I was surely comfortable. And, incidentally this is the mantra of the recumbent rider.

If comfort is the biggest draw of the recumbents, ‘back problems’ is easily the second reason people give for choosing a recumbent. These bikes also solve most common seat problems and balance issues which make them a great choice for anyone who struggles with these difficulties.

Another big advantage to a recumbent is its adaptability for many physical problems: a recumbent can accommodate a mild knee problem as well as Parkinson’s or the after effects of a stroke. For an aging population, they are a great way to stay fit and keep moving. It’s worth noting though, that there is a committed sub-section of riders that is committed to the two-wheel recumbent. The reason for the commitment is speed – after all the fastest bike on the world in a recumbent.

The Rise of Sleek Recumbents

While early recumbents are only beautiful in the eye of the beholder, there are several brands – European and American – that are selling now sleek, eye-catching machines that entice even the most staunchly upright rider to take a quick seat. These rides by Catrike, HP Velotechnik, Azub and ICE remind me of a street luge build for the latest Batman movie. They are favored by hard-core riders that put easily as many miles on their recumbents as any roadie in training. You will also see them in growing numbers on long-distance rides since there is a strong audience overlap.

The time has come for us to cast aside our misconceptions about what a recumbent is and the judgement that comes with it. Most of us have had that judge-y moment when a recumbent rider rolls up. Though maybe we don’t call ourselves haters, the mind still flashes “I wouldn’t be caught dead on one of those.” But for the people who chose a recumbent, it’s a decision they’re generally rather glad they’ve made – and in some cases it’s their salvation. Whether for overall comfort or to help a specific physical difficulty, the recumbent bike gets more people riding. And we can all agree that’s a good thing, right?

Overall I would encourage everybody to try a recumbent at least once. Ride it with the understanding that it might never be a replacement for an upright or that it will become your primary commuter bike. But it is a great alternative for long-distance riding and when riding an upright becomes challenging.

Martina Schrenke Fahrner has worked in the bike industry for many years with a focus on accessible bikes and family riding. She is a former bike shop owner and an enthusiastic cyclist living in Portland.