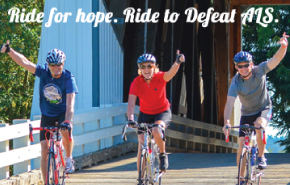 Ride to Defeat ALS in Mt. Angel is a lovely, fun way to help support an important cause. ALS stops people from moving, ultimately taking their life. An estimated 400-500 Oregonians live with ALS (also known as Lou Gerhig’s Disease) and 5,600 people are diagnosed every year in the US. Though this is a very heavy issue to discuss, Ride to Defeat ALS is an uplifting, wonderful ride – filled with people eager to support the cause and cruise through the scenic, low traffic roads around Mt. Angel.

With four main route options and a family ride, there’s a little something for everyone at this fantastic event.

Check out this great story from the ALS Association about John Schaffers and his cross country trek in support of the cause.

Coast to Coast to Defeat ALS

John Schaffers is no stranger to the bicycle. Since grade school, he has been cycling for transportation and for recreation. Over the years, with old and new friends, John has logged thousands of miles exploring the beautiful terrain of Oregon and discovering what the whole West Coast has to offer for cyclists. And for the third year in a row, John will use his bicycle as a way to spread awareness and raise funds in the fight against ALS.

John was one of the first to join our Ride to Defeat ALS planning committee, bringing great ideas to make the Ride exciting and appealing to our ALS community and the road cycling community. He had impressive experiences under his belt, participating in ten Cycle Oregon events, riding the Oregon Coast twice, and many other self-supported rides throughout the Pacific Northwest. Since retiring from his software development career with Northwest EIS-OLAP just over a year ago, John has been able to focus on his other passions. He fills his days volunteering at a food bank, taking on new responsibility at his Rotary Club, helping out as a reading mentor at a local grade school, and training on his bicycle for his next adventure: a Coast to Coast ride this summer.

Leaving May 18th and estimating the trip to take around 90-100 days, John and his friend and fellow cyclist Ted Lukasewycz will be a cross continent trek from Florence, Oregon to Bar Harbor, Maine. We will be following John’s journey through his blog updates on CrazyGuyOnABike.com. He tries to take as many photos as he is able, and updates when he can find a wifi hotspot. The pictures help him remember the beautiful adventures he has been on, but photographs really don’t do justice to the beauty found with the naked eye throughout this country. John looks forward to the gorge near Redmond, Oregon, Missoula, Montana, and the fun but hilly roads of Northern Idaho.

While John is estimated to be somewhere around Wisconsin or Michigan on July 12 – this year’s Ride to Defeat ALS – he will be representing our mission decked out in a Ride to Defeat ALS jersey and virtually raising funds for his team, Terri’s Cyclists. John’s passions are not only for cycling, but for defeating ALS in memory of his father, sister Marianne, and sister Therese, who all lost their lives to ALS. Their remaining family members are not only raising funds for care services and research. They are themselves participating in a biomarker research study at The University of Miami to determine the mechanisms of the C9orf72 familial form of ALS. “I’m in this as much for the people who don’t have it [ALS] yet as I am for myself,” John says of his involvement in the study, which requires quarterly check-in phone calls and annual visits to the University of Miami. “It’s a gift you’re giving forward, by moving the research needle forward.”

When asked if John wanted to know the results of his blood test for the C9orf72 gene, he said it wouldn’t truly matter. “Would I still have retired? Yes. Would I still be riding coast to coast? Yes.” Because life keeps moving and life goes forward. John rides on, and on July 12th, we ride on.

We are more excited than ever for our third annual Ride to Defeat ALS, pedaling for those who can’t. The day is powerful and moving and most of all, fun. John said it best in three simple words: “Food. People. Scenery.” That is what makes our Ride to Defeat ALS the best ride out there, and knowing you are helping to provide essential services to families living with ALS while funding significant research for a cure, is truly the strawberry on top of the shortcake.

If you would like to support John’s efforts on his very special Ride this year, please click here for John Schaffer’s Page.