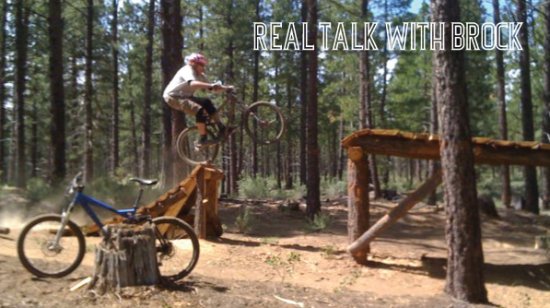 To borrow, twist and personalize a bit from my good homie and one of my favorite lyricists, Brother Ali:

“Depending on the day and depending on what I ate, I’m anywhere from 20 to 35 pounds over weight. I got blue eyes and one of them’s lazy and they both squint so when my eyes get tired I look crazy… Face tight, rugged, I stay up and work late nights. My wardrobe is jeans and faded shirts… I am what I am doctor, you ain’t gotta love me.”

Style. We’ve all got it, sort of. Mine’s not classic. Not my wardrobe nor my riding style. I walk and ride looking something between the dude pulling a zombie walk through the mall, the cat that stole your cousin’s SUV, the poly sci prof you had a crush on, and the lumberjack at the gas station who accidentally dropped a twenty but had just given you a look like he’d rather torch the hair off your head than hold the door open so… screw him.

Basically, I have no definable style, I don’t think. Forced to explain my riding style I’d say it’s blunt force trauma. Definitely not a “style guy’s” style. I get to the bottom, pretty fast. I get over the big stuff, eventually. But style? I don’t know. What is style? Is style faster? I mean, if you can dodge a wrench… right?

At the trailhead I’m the guy on the obnoxiously orange hardtail with the big fork, heavy tires, dent in the downtube, ripped shirt, dusty kneeguards and baggy shorts. Probably smiling, or sporting a scowl. I don’t have the shiny new carpet fiber bike (yet) or color matched kit (don’t hold your breath) or shiny helmet. Mine’s covered in dirt, scratches, blood and stickers – lots of stickers. My “kit style” sorta reflects my birthday suit style, dirt, scratches, blood and tattoos, lots of tattoos. Huh – maybe I do have style after all…

By now it’s probably clear: I’m not overly concerned with “style”, at least not in the traditional or classic sense. Certainly not in regards to pop-culture or trends. If I’m being honest – and let’s be honest with each other – I do put a bit of effort into my “style”. I mean, it takes a lot of coffee, chocolate chip cookies and energy to get *this* up to speed and over shit.

Either You Have It or You Don’t

Seriously though, style. Either you have it or you don’t. It pains me to admit that while I definitely know how to ride a bike. I don’t have crud for style on a bike. I damn sure know how to give a look, jump a jump, blow a berm, get my swagger on and play it cool, but I can not look good while riding a bike. Can’t be done.

I can be the first one down on a good day or more commonly, smack in the middle of the pack. I might even best a few of the young boys in the up and coming set, but I’m damn sure not going to be the one that looked rad floating down the trail. Nope. You’ll hear me coming. You’ll feel sorry for my tires and wheels. You’ll wince a few times as the trees jump out of the way and berms shutter, but you won’t wonder “Where’s he get his style?”. And that sucks because style matters, right?

I pondered this while riding a few nights ago. In a network I helped bring alive. On a trail I built. With a buddy who most definitely rides with great style. He’s a bit faster than I, but not a lot. We both hit the big stuff and both know where to put the tires and when to deploy the parachute or get on the gas, but dude looks so much better doing it. And that matters, right?

What got it into my head, at least recently, was some gentlemen, let’s call them “dewds”, who were riding *my* trail. Most on fancy carbon sleds. All of them 100 or more pounds lighter and a few years younger. All of them looked the part, talked the part. They all seemed to have the right style to rip it. They never said “hi” when I rolled up and greeted them, out of breath and dripping with sweat from dragging myself up from the bottom of “my” trail. They displayed their style like peacocks display their feathers. Clicked and clacked their buckles, levers and gadgets as they named dropped sections of my trail. Then something odd happened: They rode their bikes down my trail.

The pack of them drop in. “Scuze us bro, we gotta shred.” At least I think that’s what they said. Maybe it was “Derka Derka” or “Jelly of me style brah?” Not a lick of style, grace, speed or sack among them. Normally I don’t pull my man parts out on a bike and let ‘em wave about for the world to see. Mostly because when I do, things tend to go horribly wrong. This moment seemed to call for just that though: an old, dusty, bloody, stickered up, style-less fat guy being bold – on his trail. Fortune favors the bold, right?

Style. Can’t buy it. I don’t think you can find it. Some of y’all have it. Some of us want it. I think I exorcised my desire for “style” that night though. There wasn’t anyone faster, nobody landed deeper – not one smile was wider. I think I found my style: You do what you gotta do. Imma ride.

Brock says he does few things well, but there’s no doubt he’s a damn fine builder of mountain bike trails, makes wicked good chocolate chip cookies and according to a mug his daughters gave him he’s the “9638th best dad in the county.” Brock likes his trails steep, gnarly and littered with “Is my deductible met?” He lives in the hills outside Cottage Grove and volunteers hundreds of hours each year to the local mt. bike scene through the Disciples Of Dirt mt. bike club.