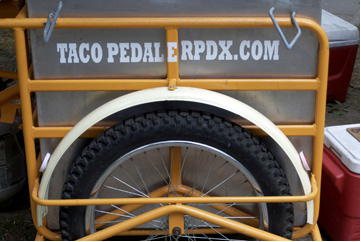 Tacos and bicycles: two items that rank very high on the list of best inventions known to humankind have been combined and are now roaming the streets of Portland. Taco Pedalers Melanie and Erica have been out on the streets since February, bringing delicious recipes they picked up while surfing their way down the entire West coast of Mexico. With a simple operation of a grill and coolers packed onto a pair of traditional Mexican cargo tricycles, the two prepare fare made from locally sourced meats and produce, served up on the freshest tortilla you could possibly eat without burning your tongue. Most often your tortilla will be cooked right before your eyes, and even during their daily lunch rush odds are your tortillas won’t be more the five minutes old. The result is a fantastic taco.

Stop by and try one (or two or three) for yourself. Most weekdays they can be found downtown at Lownsdale Park on SW 3rd and Main. Wednesdays they’ve got a spot on N. Mississippi Ave at Shaver and on weekends they roam the streets but you can catch up with them if you follow them on twitter @TacoPedalerPDX.