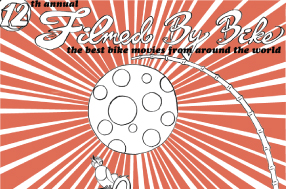 This year’s film festival promises 45 films from 14 countries shown over the course of four days.

New for 2014, Filmed by Bike will host Bikes in the Night Sky, presented by Arkel. Live stories will be told on stage at the Clinton St. Theater.

The 12th Annual Filmed by Bike is April 19-22 at the Clinton St. Theater. Be sure to snag your tickets early to ensure you get into all the shows you want to see. With all that variety, we recommend a festival pass, a great deal that gets you into the awards ceremony, storytelling, filmmaker Q+A sessions, all showtimes and offers VIP privileges.

For a glimpse at some of the movies being shown this year, follow Filmed by Bike on Instagram: FilmedByBike.