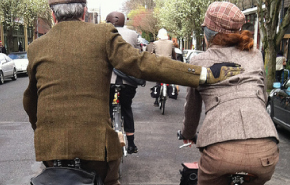 Tweed Rides happen all over the world, with the sole goal of rallying people to ride dapper. It’s not about the mileage, it’s not about a cause, it’s just about looking good and having fun on bikes.

Who can argue with that?

Sunday April 7, 2 pm
Mount Tabor Park
Meet at the Pavilion on the north side of the park, near the basketball court

Organizers say the ride will be about three or so hours, “with a generous break stop in the middle and a generous break at the end. The ride is a moderately-paced, ramshackle affair. Please do not expect it to run like clockwork.” There is no entry fee.

The ride will end at VeloCult in Hollywood District for beers and a photo booth.

So just what is tweed? Tweed is an unfinished wool fabric. The weave often creates a pattern, such as herringbone. It is widely regarded as a stylish way to harken the olden days, or just look good in the modern age.

The ride was first founded in London, as the Tweed Run, to encourage people to ride in traditional British cycling attire, for which Tweed was rather common. The ride quickly caught on around the world as riders used it as an opportunity to leave the lycra and synthetics behind in favor of a fabric with a little more heart and soul.

If you don’t have anything that’s exactly tweed, it is generally acceptable to show up in wool, old fashioned clothing, knickers and particularly hats (the ride moves slowly as a cohesive unit, so going without a helmet for the duration of the group ride really isn’t all that radical).

Below is a modest photo set from last year’s ride.