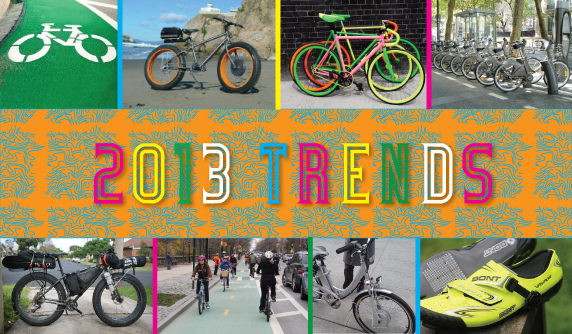 It’s a brand new year, and here at ORbike.com we have a few predictions about what it’ll bring. We may still be a ways off from flying cars and holodecks, but there are some pretty cool products in the works.

From fat bikes to better cycling infrastructure, we’re pretty sure 2013 is going to be awesome.

Hailing from Alaska, these wide-wheeled beasts were originally created by Mark Gronewald of Wildfire Designs Bicycles for biking in the snow. His fat-tired designs excelled in some of the crazier Alaskan endurance races (think Iditarod for bikes), and over the last few years they’ve started to catch on in the Lower 48 and beyond.

So what is a fat bike? They’re essentially mountain bikes built to accommodate tires as wide as four inches. The width of the tires and low tire pressure gives them the traction and floating power to tackle snow, sand and other terrain that regular bikes can’t handle.

Fat bike advocates are busy hammering out best practices for sharing trails with other users and working out details of their use on public lands. The 2nd Annual Fat Bike Winter Summit and Festival will take place January 25-27 in Island Park, Idaho.

Wildfire Designs still makes their FatBikes (which are handmade by DeSalvo Custom Cycles in Ashland, OR), but Surly and Salsa have taken the lion’s share of the market with the Surly Pugsley and Salsa Mukluk (as well as newer offerings). Head over to Fat-bike.com for a complete list of manufacturers.

Inspired? Your fellow Oregonians are fatbiking in Seaside, Mt. St. Helens, the Oregon Dunes, Bend and anywhere else that looks like fun.

Electronic bikes are huge in Europe and Asia, but so far they’ve been slow to catch on in the US. The sales gap might be a byproduct of how we look at cycling—in the US, the cultural association of cycling with sport rather than transportation has put a stigma on riding e-bikes that doesn’t exist overseas.

Slowly but surely, however, e-bike sales are growing. They picked up slightly when gas prices spiked to $4 a gallon, and seem poised to gain momentum as an increasing number of people get into bikes as a means of transportation – both for themselves and their cargo. In fact, Pike Research (a market research and consulting firm in the green tech industry) predicts that e-bike sales will grow by almost 50% in 2013.

E-bike manufacturers like Prodeco and Currie Tech are putting out a variety of designs for everyone from commuters to retirees to athletes, while cargo bike company Yuba offers a pair of cargo bikes, the elMundo and elBoda Boda, which have electric assistance to make it easier for people to ditch their cars and take up utility cycling.

As cycling for transportation becomes a bigger trend in the US, it seems only natural that e-bikes will be a big part of that equation.

Is your interest sparked? For a comprehensive guide to e-bikes and conversion kits, as well as the stores that sell them in the US, check out Electric Bike Report. In Portland, shop e-bikes in person at the aptly named eBike Store at 201 N. Alberta.

Folks, that fluorescent commuter jacket you’ve been rocking for years has just become fashion-forward. Did you notice those eye-burning pops of 80’s throwback color that the kids were wearing last summer? Well, it’s not over yet.

Road.cc’s roundup of fluorescent yellow 2013 gear features everything from shoes to helmets to locks. We’ve even spotted toe clips. Whether your color of choice is highlighter yellow, neon lime green, safety orange or all three, be prepared for the slew of compliments you’ll get from the fashionistas this year

(If we’re bringing back the ’80’s, can I please put in a request for hypercolor bicycle frames? Thanks.)

On the other end of the fashion spectrum, neon is totally out. As more people take up cycling as part of their daily lives, clothing companies are beginning to take note. The overwhelming success of Iva Jean‘s recent Kickstarter campaign shows that women, especially, are looking for chic clothes that transition easily from the bike to a professional environment. Companies like Betabrand and even Levis have launched lines aimed at the casual commuter.

Even as apparel companies angle for a slice of the cycling clothing market, more people are realizing that there doesn’t have to be anything particularly “bike-specific” about their wardrobe in order for them to enjoy cycling. A growing number of cycling fashion blogs and tweed rides are popularizing the idea of people wearing their everyday clothes on bicycles.

Cities will prioritize cycling as a means for economic growth

Studies like this one from the League of American Bicyclists have shown that cycling and economic prosperity go hand-in-hand, and around the country local governments are starting to take note. Yes! Magazine recently featured a trio of cities—Minneapolis, Washington D.C. and New York—that have been attracting good jobs as a direct result of their focus on better cycling infrastructure.

In Chicago, Mayor Rahm Emanuel’s speech at a protected bike lane ribbon cutting directly linked cycling infrastructure with economic growth, and issued a challenge to Portland and Seattle. “I want them to be envious because I expect not only to take all of their bikers,” he said, “but I also want all the jobs that come with this.”

According to Bikes Belong, protected (green) lanes doubled in 2012, and is set to double again in 2013 as more cities begin to take note of their neighbors’ successes.

What are you most hoping to see in the new year? Share your ideas below.