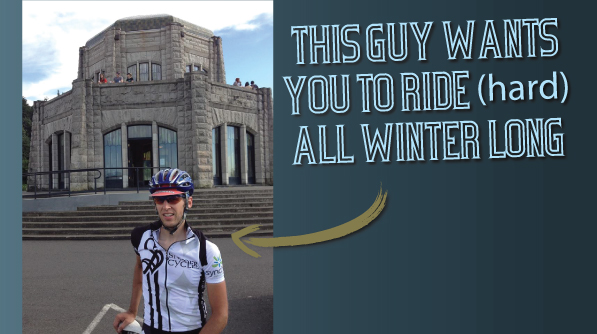 Don’t you just hate it when you’re feeling tough enough to brave a dreary winter day and hit the road on two wheels, all geared up and ready to go, only to find out that all your riding buddies have bailed? Weak.

William Santana wants to make sure that doesn’t happen for you this winter. That’s why he started the new Portland Winter Bike League, a weekly competitive riding group – rain or shine.

“This ride is for anyone who is competitive or has a competitive spirit and wants to have fun on the road despite the typical Portland winter weather. Basically, male and female, young and older, competitive/aspiring athletes or the die-hard curmudgeons will find this ride fulfilling.”

Most rides will start with an average of 60 miles, increasing to 115 miles as the season progresses with speeds averaging up to 22-24 mph on the flats. To make things even more interesting, William has devised a points system to reward people for going hard at designated attack zone sections of the route. Though these rides are geared toward competitive riders, don’t worry if you’re not hardcore – everyone gets points simply for showing up. We like that spirit!

“No matter what your seasonal goals are, you can go out and get a good hard ride in, get points and glory or, hang back and be devoted to your training regiment.”

The ride will roll out every Saturday from Western Bike Works: 1015 NW 17th Ave in Portland. Sign in opens at 8:30am and the ride departs at 9am. The timing may change as seasonal weather advances, so stay tuned to the group’s Facebook page for updates.

RIDE AND RIDER BORN IN ATLANTA

William is from Atlanta, where there is a 50-person group ride just about every day of the week and the original Winter Bike League has been happening for years. “That kind enthusiasm is something I would like to be a able to contribute to here in Portland,” he says. “The idea for a Portland WBL has been rolling around in my head for over a year now. It just seems like the right thing to do.”

Though William started as a casual rider, he quickly caught the competitive bug. “I started out riding bikes in Atlanta doing urban night time rides in 2003. It didn’t take long until I found out what a track bike was and then got a job as a bike messenger. Six month into that, I started racing track and stayed steady into that for five years. I picked up road racing and tandem riding along the way and have been pretty much non-car reliant from there.”

There are already chapters of the Winter Bicycle League in the warmer climates of Charlotte, SC; Greenville, SC; and Haymarket, VA. William is proud that the Portland chapter is the first on the West Coast, and the ride certainly has the rain stacked against it, but he’s completely up for the challenge as he declares, “The season is ON!”

Portland Winter Bike League kicks off on October 5. The inaugural ride is the “Bull Run Ride,” 70 semi-social miles of riding with a couple of attack zones thrown in for fun. Speeds may warm up to 22-24 mph on the flats.

WHEN: Every Saturday through winter
WHERE: Western Bikeworks, 1015 NW 17th Ave in Portland [map]
TIME: Sign in at 8:30am, Depart at 9am (confirm time by checking the website)
MORE INFO: Winter Bike League Facebook Page >>