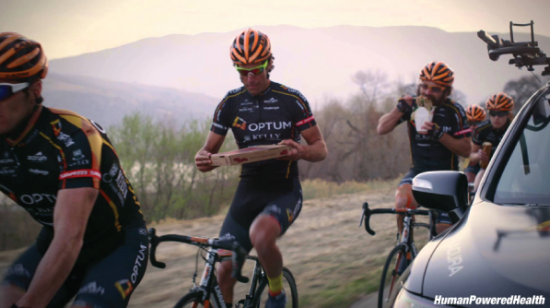 Every biker remembers their first time. No, no, not THAT first time, we’re talking the first time they bonked.

Perhaps you’ve heard about it, others have told you about their own experiences but you never thought it would happen to you. Then wham! You’re out for the count, losing touch with reality.

My first time was in France whilst riding from London to Paris over three days. It happened somewhere between St Malo and Paris – please forgive my vagueness, in my condition, I was way beyond geographical certainty.

Let me back up. That morning I had shunned the grim looking breakfast on offer at the ferry’s “restaurant” in favour of a few extra minutes of sleep (in truth I could’ve been a little hungover from a late night in the Ferry’s “night club”). Besides, I was trying out an energy powder, ‘free-mixing’ it with approximate measurements into my water bottles.

Upon further research later on, I found out that energy powders might not actually improve the performance during extreme exercise. It turns out they subtly change the way you feel during that exercise. Recent research carried out by United States Sports Academy and Concordia University Chicago has shown that the supplements cause vasodilation of the arteries within the muscles being worked the most. This increases cardiac output and decreases systemic resistance which gives a tickling feeling on the skin that makes you feel as if you are pumping those pedals harder.

After an hour or two naively setting the pace on the front, burning nothing but early morning enthusiasm, we hit a small town and descended en-masse on an inviting looking Boulangerie, where if my memory serves me right I gorged on an apple turnover, pain au raisin and a cone shaped pastry filled with custard. Whilst admittedly a little queasy I felt good and ready to ride on to Paris. The sugar hit that ensued was palpable.

Sugar is broken down into simpler carbohydrate molecules in the gut. In turn, these are broken down in the constituent glucose molecules which are stored in adipose tissue and the liver. Glucose is the most essential ingredient that the body needs in order to produce energy – every cell in the body needs it. Although the breakfast I just ate may not have contained much other nutritional content, I did get that hit of energy I needed to continue… but not for long.

Half an hour later, slowly at first, I started to struggle. Hanging out at the front of the peloton didn’t feel so good. So, I hung on at the back, the wheel in front becoming harder and harder to hold. The gap was getting wider and wider; first six inches, one foot, a yard. Then the elastic snapped. I was off at the back.

The rest of the day was a blur. Every pedal turn became a monumental effort until I threw in the towel. Lying amongst the flowers in a roadside pullout chewing slowly on an energy bar, I wondered where it had all gone wrong.

Energy bars have one purpose – to give you that extra drive required to push you that extra mile. How do they do that? You guessed it: Glucose. Energy bars are not fantastic for nutritional content but that’s because they don’t need to be. By supplying you with a rush of carbohydrates the bars fulfill their purpose by giving your muscles the energy they need to push those pedals an extra turn.

Now I don’t wait for the hunger pangs, I dutifully consume a bar on a regular basis. I keep hydrated, again with the hydration tab brand that’s the most effective in warding off cramps in my legs (it’s worth trying a few different brands to find your optimum). If I know a big climb is coming up or know the pace is going to pick up, I pre-empt the increased energy burn with an extra bite or two of energy bar or a banana.

This is optimum fueling efficiency because at this stage, my body is respiring both aerobically and anaerobically. By respiring anaerobically, the liver is undergoing a synthesising glucose to meet the energy demands of the legs during cycling. The main thing to remember is that eating little bits enables us to give the legs enough energy at the points it needs it the most.

Only in an emergency – Chris Froome on Alpe D’Huez style – will I resort to energy gels or jelly babies/beans to get me through to a proper food stop or even better the end of the ride.

It’s only after completing this mammoth ride, that I realised how important nutrition is. Eating right is what can make the difference between muscle ‘hangover’ and post workout soreness. Ultimately, everybody is different and I highly recommend you test different types of pre- and post-workout nutritional plans to design something that is unique to you. But be aware of the claims energy bars and powders elude to – although they may promise you the world, let your body be the judge.