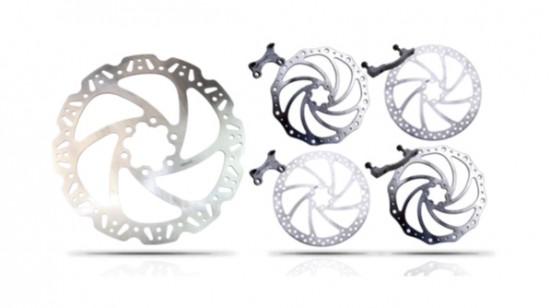 Now that disc brakes have migrated into the mainstream, you might be wondering if they’re the right choice for your bike. For the past 15 years disc brakes have been standard on mt. bikes, and now they’re also a legitimate option for commuter bikes, e-bikes, cargo bikes and road bikes. Unfortunately, I run into a lot of clients who are intimidated by them, usually because of a lack of understanding or out-dated ideas.

A disc brake consists of a thin, metal disc (the rotor) that attaches to the middle of your wheel and spins with it as you ride. A caliper attached to the bike frame is suspended around the rotor. For a bike to have disc brakes you have to have the corresponding mounts built into frame. When you pull the brake lever at the bars, the brake pads in the caliper close around the rotor to stop it – and the wheel – from rotating.

Because you’re stopping the movement near the center of the wheel as opposed to near the tire where there is more centrifugal force keeping the wheel spinning, disc brakes are more responsive, have more power and are less affected by dirt, mud or water. This has long been the go-to technology on cars and motorcycles for a good reason: it’s one of the most consistent and powerful ways to stop a moving object on wheels.

The rotors are usually made out of stainless steel, but the higher end ones may also be made of aluminum or titanium. They have holes cut into the area where the pads make contact to dissipate heat and shed any unwanted mud, water or debris. Rotors are much more durable than rims — meaning overall cleaning time and regularity is less than that of a rim brake.

Disc brakes have a lot of pros.

A common misconception is that disc brakes are a pain to work on. While they can be difficult to set up, the good news is they are dialed in before anyone test rides the bike. Barring the initial set-up from the shop, there is much less ongoing maintenance since the pads and rotor don’t wear as fast or hard as a rim brake or it’s pads. The little on-going maintenance required is generally simple and quick.

As for disadvantages, disc brakes are slightly heavier than rim brakes and usually a bit more expensive — though prices and weights are coming down quickly down as the technology spreads. Usually, the difference in weight or initial cost is insignificant compared to the gains in reliable braking power and savings on maintenance.

Initially, there is quite often sticker shock. Bikes with disc brakes cost more, and disc pads are twice the cost twice of rim brake pads. But disc brake pads but only need to be changed about a quarter as often. If you commute year-round or race cyclocross with rim brakes, you likely have to spend $200- $600 and up for a new wheelset every two to three years. With disc brakes, it’s as simple as upgrading to a new $40- $80 rotor every few years. Cha-ching!

A few years back the selection of wheels and hubs (which are specially designed for rotor attachment and built with strong enough spokes to take the torque of stopping the wheel) was slim. With the technology being adopted across the spectrum of bikes and riders, your options are now as vast as rim brake wheels, so that disadvantage has become obsolete.

Are Disc Brakes Right For You?

Give ’em a whirl. I think you will be pleasantly surprised.

Stay tuned! Coming up in the next months I’ll cover the common types of disc brakes and pads.

Tori Bortman is ORbike’s resident bike mechanic. She is also an educator, consultant and the owner of Gracie’s Wrench. Tori’s new book, The Big Book of Cycling for Beginners, was recently published by Bicycling Magazine.