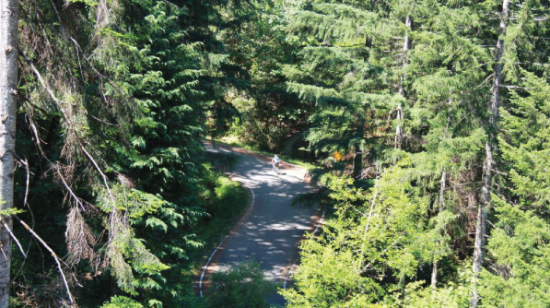 What’s up in Powers these days? Is it the track team at the high school (enrollment 35) working to improve on its second-place finish at state last year – and that’s without a school track! They practice on the streets and roads of Powers, ignoring stop signs while looking both ways.

But, this article is not about that phenomenon; it’s just indicative of the spirit in Powers, the spirit that drives the town as it prepares and presents the Tour de Fronds. This year’s 21st edition is on June 16. It’s not just a cycling event, it’s really three days of fun with heavy breathing the second day. That’s why it was voted OrBike’s Best Ride in 2016 and why the 2011 Cycle Oregon riders loved their overnight there so much.

Friday night is a spaghetti feed at the county park with live local music, Saturday is the ride and a fabulous dinner following the ride (think berry cobbler), then a pancake breakfast on Sunday. The drive home frankly is kind of a downer.

There are seven rides to choose from, the shortest being the 30-mile out and back over mild rollers along the Coquille River to Daphne Grove. Or, you can continue past Daphne Grove to Eden Valley, which is just as beautiful and quiet as the name implies, for a 63-mile round trip. Or, keep going past the Eden Valley rest stop to Arrasta Saddle for a 77-mile ride that climbs to a ridge with a rest stop on top, the only kind of ridge, right!

For the young, the strong or the delusional, go over Arrasta Saddle and complete the Mahaffey Century named for the 75+ year old local legend who you might pass on the ride, but you might not. He rides like it’s milking time for the cowherd he tends.

If you’re not in Mahaffey’s league, do what I do – ride the Rogue River-Singing Springs option. It’s 71 miles and 5,500’ feet of climbing over Agness Pass, then six miles down a bumpy gravel road until you get to the smoothest pavement I’ve ridden on. There you can stop at Foster Bar and put your feet (or all of you) in the Rogue, dry off and ride that smooth pavement down to Singing Springs Resort for lunch on the patio looking over the river as mail boats and rafters go by. After lunch, hop on and ride up the gradual 11-mile climb to Agness Pass. Stop at the cold-water spring that’s about 2/3 of the way up, as if a Hollywood producer said ‘wouldn’t it be nice to have a cold-water spring coming out of the bank next to the road here’ for a scene in a wilderness movie. When you get to the top at Agness Pass, you can just about coast back to Powers.

If you want a ride option with more gravel, try Big Tree-Flannagan Prairie. I haven’t yet because of the addiction to the Rogue River-Singing Springs ride. For both those rides, it’s a good idea to use 32s for tires, although I did the ride with 28s last year without problems.

If you like a cycling event where there is only occasional car or pickup traffic, the Tour de Fronds might not be for you – there isn’t even enough traffic to call it ‘occasional.’

Well worth a lot of effort to get there and when you leave you’ll start thinking about next year.