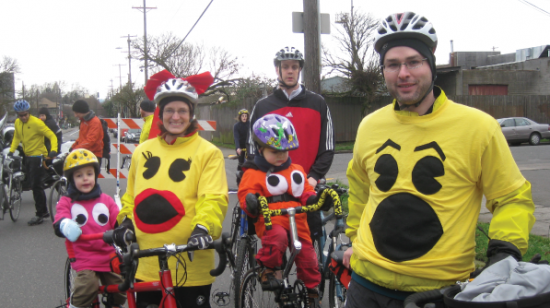 We first noticed the Alig family when they were dressed as dalmatians at the 2012 Tour de Lab bike ride. They looked AWESOME.

One day we were going through photos from Worst Day of the Year Rides from over the years and we noticed that the Alig family popped up every few years with impressive group costumes. So we decided it was high time we caught up with this creative biking family.

Maybe you’ve seen them out there. They’ve arrived by bike dressed as Pac-Man, Ms. Pac-Man and ghosts, Cat in the Hat, dinosaurs, crayons and then last year, Minions and banana at the Worst Day of the Year Ride.

We sat down with dad Tim Alig to find out more. Along with his wife Anna and sons Zach (9) and Travis (7) they are quite the creative biking bunch.

Does your family get creative with other events, or mostly the Worst Day of the Year Ride?

The costumes usually start as Halloween costumes and get reused at the bike rides.

Why do you like dressing up as a family?

We enjoy the reactions from other people. The kids think the costumes are fun and cozy.

Why do you like participating in the Worst Day of the Year Ride?

The ride is a way to get out in the middle of winter. The kids enjoy the bike ride and other costumes. It’s also a way to teach the kids that it doesn’t have to be perfect outside to go do something.

What do your kids think about being involved in the event?

They like the treats at the stops and the challenge of the ride.

Who is the mastermind behind most of your getups?

The ideas come from the kids, I restructure the ideas into a feasible theme and Mom makes the costumes.

We know what you’re all wondering and Tim says, yes, they will be at this year’s Worst Day of the Year Ride. As to what their costume will be, he’s tight lipped, “That will be a surprise,” he says.

A Family That Rides Together

Tim and his family are no strangers to bike rides that are much more intense than the quirky Worst Day of the Year Ride. They have completed several self-supported tours, including a 500 mile month-long trip along the Sierra Cascades bike route form Hood River to Hilt, CA. “We have plans to to complete the Washington and California sections a some point in the future.”

The family has also ridden through the San Juans and Victoria, Canada and along the Old West Scenic Bike Way. Later this year the family plans to ride the Bitterroot, a 300k ride in Idaho and Montana, the Monster Cookie Metric Century out of Salem and a backpacking trip through the Wallowas.

“The main thing is teaching the kids that they can go on adventures and things don’t always go right. Our 500 mile trip was hampered by a fall off the monkey bars and a broken arm for my youngest. We’re not particularly fast or strong, but we still make it,” Tim says.

The ride says costumes aren’t required, but we feel the ride just wouldn’t be the same without them. Even if you simply don a wig over (over, not under – it’s much radder that way) your helmet, you’ll be getting into the true spirit of this wacky annual tradition.

Special thanks to Tim for sharing these family photos with us. 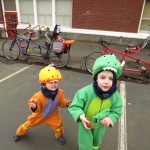 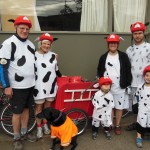 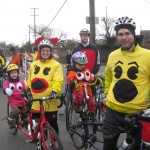 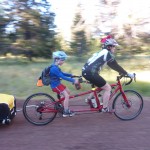 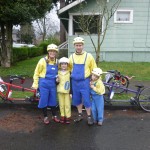 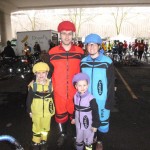 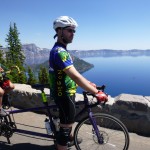