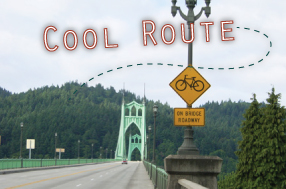 There is an ample sidewalk to take over the bridge.

St. Johns is located in North Portland on the tip of the peninsula formed by the merging of the Willamette and Columbia Rivers. Named in honor of settler James John, the area was originally laid out as an eight block town in 1865. So the story goes, James John was reportedly a recluse, which inspired the population to address him as ‘Saint’ John.

This route comes to us courtesy of Rubber to the Road, the longstanding resource for local rides.