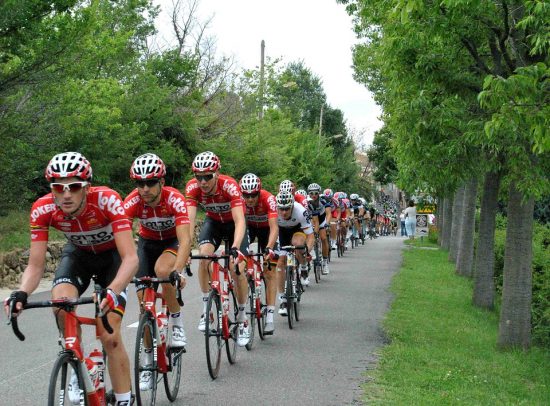 An idyllic ride through the countryside sounds like a lovely way to spend a Sunday afternoon but riding is never that simple. Mountains would be difficult to walk up – let alone cycle. Overcoming nutrition and hydration issues or saddle sores is a staple of the sport. In three-week grand tours, there’s the day-to-day fatigue and close proximity to your teammates to take into account.

But whilst races through the Alps and Pyrenees are par for the course when it comes to pro cycling, and known by all cycling fans, there’s nothing quite like the spring classics to condense all of that excitement, drama and indeed pain into one afternoon. They are just different races, but for anyone who is only a casual follower of cycling as a spectator sport, it’s this sort of variety that makes the whole calendar so interesting.

A Sunday in Hell

First and foremost, the spring classics are for the strong men. You win the Tour de France in the mountains, but you win the classics with the power in your legs. Tom Boonen and Fabian Cancellara spring to mind instantly: powerful men who are suited to the one-day races. This year, you’d expect Peter Sagan and Philippe Gilbert to be up there.

They are not idyllic Sunday afternoons on the road. Indeed, the most difficult of the lot is Paris-Roubaix – the race they call A Sunday in Hell. And a race that was dominated by Boonen and Cancellara in the last decade.

What makes it so hard is not its length or its hilltops. It is not the field you race against or the speed you go at. But if you were to race the whole thing on the nicest of roads – the kinds of which you’d find on a Tour de France sprint stage – you would get a very different race to what you’ll see at the Paris-Roubaix in the second week of April – the 8th this year, to be precise.

It is the terrain that makes it such a special race and nothing else – the patches of cobbled roads that have not been covered in asphalt are part of the lore and the difficulty. The winner gets a trophy made of a cobble stone and the glory of being able to say he is a Paris-Roubaix champion – a badge of honour and toughness. Currently Peter Sagan is tipped to win the Paris-Roubaix in 2018, but this can all change on the day!

The cobbles – sections of pavé, as it is known in French – are a staple of northern France and Flanders. It is a region known for its World War One memorials and its love of bike racing, and you can see why the pavé plays such an important role: it is not just there for show. It adds to the drama in a way you might not expect at first glance.

Cobbles make for an unpredictable race, but they’re used sparingly. Most of the day is spent on normal paved roads, but for several stretches of a few kilometres, the peloton hits the pavé and all hell breaks loose for a few minutes.

Pavé turns the race into a spectacle. Not the whole thing, but in parts. For the viewer, it is a treat to encounter them. Like the meat in a stew, you savour them while you’re watching. They are the main event, but made better by their scarcity.

And it is a boneshaking few minutes. For the riders and almost for the spectators, too. You can see the bumps and the potential bruises, the difficulty these professional riders are having in keeping their bikes going straight. The power you need to glide over the cobbles is massive, and only the strongest can do it.

If you can’t, you are at the mercy of luck.

When the riders come up to a section of pavé, they are supposed to stay in the middle of the road. That is where the cobbles are at their most difficult to navigate, but it is also where the road is cleanest. Fall away to either side and you’ll find it easier to push the pedals, but you’ll also be cycling in silt, stones and shards discarded by bikes, cars and the wind. In other words, you are cycling in a whole world of potential punctures.

That’s why it’s a test of the strongest. Those who can deal with the cobbles the best, and those who can use it to pull away from the field by the time they get to a clean stretch of road. They are the riders who will win the event.

As hellish as it might be for those in the thick of it, Paris-Roubaix is one of cycling’s most thrilling races for those watching on.