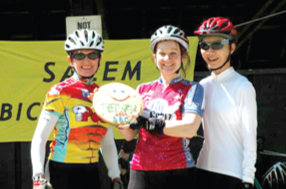 The year was 1977. The Salem Bicycle Club had 25 registered members, only 10 of whom were very active. The club was relying on meager $5 membership dues to fund club activities, but it just was not enough. The club needed a fun fundraising event so supplement the kiddy, and that’s how the Monster Cookie Metric Century was born – a ride so beloved it has it’s own historic record and a solid crew of die-hard aficionados.

It’s early in the season, the perfect time for metric century, the warm up version of a full on Americanized Measurement System Century (AMSC, not at all an officially sanctioned term). Loosen those legs and start your season off right on April 27 in Salem.

Every year the Salem Bike Club hosts this spring opener, a ride prized by those who swear by the healing properties of an early season stretch.

The Monster Cookie starts at the State Capitol Mall and takes riders over back roads to Champoeg State Park then back to Salem. The course travels a portion of the Willamette Valley Scenic Bikeways, a calm, low traffic route on beautiful roads. The route travels through farmland, wide open expanses and alongside Willamette Mission State Park. The route is an early season ease-in: generally flat with a few short hills.

Monster Cookie has options for how supported you’d like the ride to be. The stripped-down version is only $25 (advance by April 18) for the entire day, and you bring your own lunch. You may also have a sandwich lunch ordered for only $7.50 and add on an optional shirt for $20.

Sunday, April 27
Start between 8am and 10am.
State Capitol Plaza Mall, North Side of the building
WEBSITE >>
ROUTE OVERVIEW >>