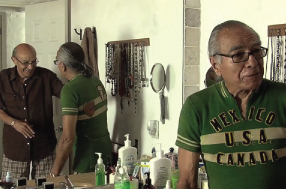 We think you ORbike readers are really going to love this Mexican film that’s playing in the 12th Annual Filmed by Bike.

May 1, 1956. Two brothers, Arturo and Gustavo Martinez, leave their hometown in central Mexico with the desire to cross the continent on bicycle. Eighty-two days later, they arrive in Toronto, not knowing this feat would change the entire route of their lives and of their family tree.

This epic journey has formed part of their family’s folklore. Fifty-four years later, Arturo and Gustavo – now in their 70s – retrace the same path, in an exploration of memory, the cycle of life and the unavoidable passage of time. Join us as we adventure along for a glimpse at this important piece of Mexican history.

Sunday, April 20 at 3pm
Includes an all-ages Easter Egg Hunt in the theater!