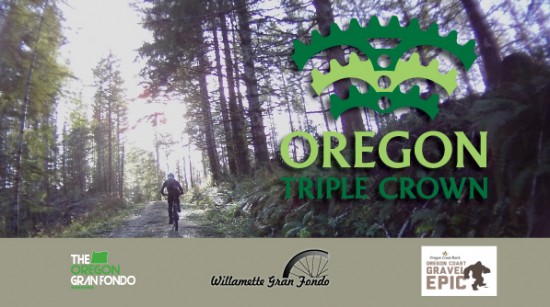 Every once in a while, an event comes along that truly tests the mettle of the competitors, but rarely is it as beautiful as the Oregon Triple Crown.

The Oregon Triple Crown is comprised of three Oregon races, each with varying difficulty and terrain, spread out within a four month time period. There is plenty of time to train and recover – and you’re certainly going to need it. But don’t worry, the organizers have built in some much-needed revelry, too, so there is plenty of opportunity to celebrate with others at the end of the grueling day.

Few people have ever attempted the Oregon Triple Crown, now in its fourth year, and even fewer (approximately 50) have earned a coveted spot on the Wall of Honor. Is this your year to give it a shot? We think so.

Starting from the historic town of Cottage Grove, the course heads west into the Coastal Range. This race gives riders the chance to kick start the season with a bang: 117 miles and 5,700 feet of merciless climbing. The route is gorgeous, and either that will be what keeps you going, or you may not even notice.

This year’s event is capped at 500 total so register early for best pricing and a place on the starting line.

This ride, capped at only 300 riders, is an amazing journey through the foothills of the Willamette Valley and into the Oregon Coast Range. The course takes you past wineries and gorgeous sweeping vistas. The 85 mile loop features 6,200 ft of climbing including a steady effort past Mary’s Peak.

If you are preparing for Ramrod or another epic adventure in the Northwest this may be the tune up the doctor ordered!

ORbike contributor Robert Underhill once said of this race, “This is the one that will keep me awake every night leading up to it.” Fortunately you’ve got all summer to train for this rugged adventure, the shortest in the series at only 73 miles. Short though it is, the Oregon Coast Gravel Epic more than fills its quota in terms of climbing with 10,000 feet of elevation gain primarily along gravel roads.

The Oregon Triple Crown is comprised of the most intense routes of all three of these races, but there are shorter routes. Bring along your friends and family – even if they’re not competing in the overall series they can still enjoy a day of riding, and the revelry that comes at the finish line party.

The Oregon Triple Crown makes for a very approachable personal challenge. Aid stations with food, sometime entertainment, meals and a finish line beer garden keep these races within the reach of all skill levels. And if you’re feeling up for the challenge, sign up to compete in the longest routes of each race and vie for the Oregon Triple Crown.

In addition to major bragging rights, everyone who successfully completes the Oregon Triple Crown gets:

Are you racing the Oregon Triple Crown or any of the individual races? What are you most looking forward to?