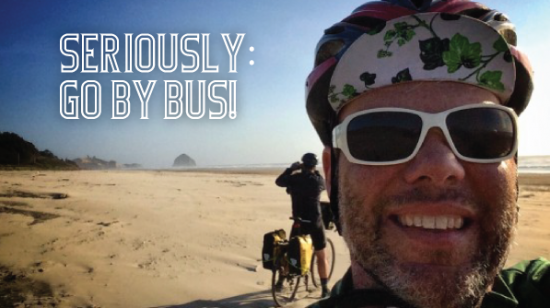 Who doesn’t love exploring new areas by bike – blasting down gravely forest lanes, cruising along coastal roads and meandering through rolling farmland, far from the city, with the horizon as a constant companion? That’s the good stuff; it’s what we all want. The hard part is getting there. Sure, I COULD ride to almost any place by bike, but that’s not always the best option. How does one efficiently get out to these exciting remote places without a car? More and more, my answer is: by bus.

In the past year I’ve made more of an effort to find almost any way I can to take transit to the start of my bike trips. Thankfully here in Oregon we’re we’ve got a wealth of pretty good transit options to minimize travel time to the outlying areas of town. Using bus service, often combined with Portland’s MAX light rail, I have been able to greatly extend the amount of time I spend cycling around the places I want to be, instead of wasting time riding through congested urban density to get there.

So, the logical next question I’m sure you’re dying to ask is: “Where can I go by bus with my bike, and how do I get there?” Here are some cool ideas.

Biking Mt. Hood and beyond

From my house at the south side of Mt. Tabor, one of my favorite places to spend a day or two (or more) out on my bike is Mt. Hood. The routes within that region are nearly endless. Taking the MAX, or pedaling the Springwater, to the Gresham Transit Center, I catch the Sandy Area Metro (SAM) that meshes with the Mt. Hood Express (MHE) all the way to Government Camp. Most times I hop off in Zig Zag or Sandy to pedal Barlow Road, or to venture to Lost Lake and Parkdale. Deboarding at “Govey” puts you reasonable striking distance of Dufur, Tygh Valley and several other ‘dry-side’ gems to the east of Mt. Hood.

SAM and MHE are committed to making their service work well for bicyclists. Both buses have bike racks and the MHE can carry up to 12 bikes in spring and summer. More than once, arriving just in the nick of time I have had the bus driver stop and wait for me to load my bike or allow me to put my bike inside the bus when bike racks are full. And it gets even better: From Gresham to Timberline expect to pay only $4 for you and your bike. No joke. You simply can’t drive there so inexpensively.

From the western end of the MAX in Hillsboro, an easy pedal through rolling farmlands deposits you at eastern slope of the Coast Range. Some of the best gravel road cycling in the entire state lays between here the Pacific Ocean. I’ve found that I can cut out of work a little early on a Friday (oh darn!), pedal north on the Banks-Vernonia Trail and make it to Stubb Stewart, and Vernonia before sunset. I can make equally good time riding south to the campgrounds above Carlton at the Nestucca River.

These campgrounds make a perfect launch point for riding to the Coast the next morning. From here, a day in the saddle has seen me spending evenings in Astoria, Manzanita, Pacific City and Tillamook/Cape Lookout.

I generally return to Portland using the WAVE from Tillamook or Columbia County Rider (CC Rider) from Astoria. Both system’s buses are equipped to carry only two bikes each, but the operators have readily stowed my bike inside when racks were full. And although the $20 round trip fare is a bit steeper than other routes, buying a round-trip ticket allows you to have returns from the coast and the tickets have no expiration dates… not bad!

Biking north and south of Portland

Going further afield requires a bit more planning than a hop on the MAX, but fortunately it’s not much harder. Using Bolt Bus from downtown Portland, you can bring your bike to Eugene, Seattle or Bellingham. From these starting points the San Juans, southern Oregon Coast, the Olympic Peninsula, and the Central Cascades lay at the front of your wheel. The possibilities are endless.

On the Bolt, your bike is stored underneath like luggage for no extra fee. Tickets range from $9- $27, depending on destination and can be booked online for a small extra fee.

Now that you know, where will you go?

Traveling with your bike by bus isn’t the only option for extending your range, but is sure is an easy one.  Now that you know how to get out and see a little more of the world with your bike, where will you go on your next trip? Share your ideas in the comments below.

Tyler Robertson has many touring miles (and stories) under his belt. He shares his wisdom on his blog Two Wheel Travel and he’s currently working on a book about bike touring in Slovenia. Tyler lives in Portland.