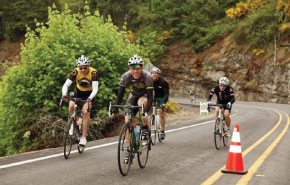 ORbike Contributor Robert Underhill is vying to be one of only a handful of people to have ever completed the Oregon Triple Crown. [full story] He recently completed the first race in the series, the Oregon Gran Fondo. Here’s his report.

It wasn’t the best showing by far, but the Oregon Gran Fondo is down and I’m still looking to complete the Oregon Triple Crown.

117 miles and just under nine hours after leaving Cottage Grove, I pulled back into town, crossing the finish line and immediately went for a plate of food. The majority of the day was fairly cold, at least colder than anticipated, as I didn’t bother donning a shell, arm warmers or anything really intended to keep myself warm. As a result, I spent the majority of the downhill sections tapping my brakes to prevent hypothermia and shivering my bike off the road.

I likely could have pushed my pace harder, but I mostly trained for the ride by mountain biking. I think the fastest I moved was along a more gravelly portion of the course between mile 52.5 and 72.5. The route was fairly pleasant, for the most part fairly mellow, the hill climb being well within the range of my gears. It wasn’t until the roughly ten-mile climb to Oxbow Summit that I started questioning the mileage on the course.

The aid stations were well stocked, each slightly different from the previous. I don’t recall ever appreciating a pretzel stick as much as when I picked up a few at the final stop before heading on to the finish.

As a whole, this was a great ride and left me excited for what is supposed to be an even more scenic Tour of Aufderheide. I can’t say that I’ll be better trained as I’m planning more mountain biking, but I feel a bit better about my chances for completing the Triple Crown. I’ll hope that the food and beer at the end of Aufderheide is as rewarding as it was for the Gran Fondo.